The SportsLiteSports at just one click!
HomeFootballTottenham takes on Sporting CP as they aim to extend the unbeaten...
Football 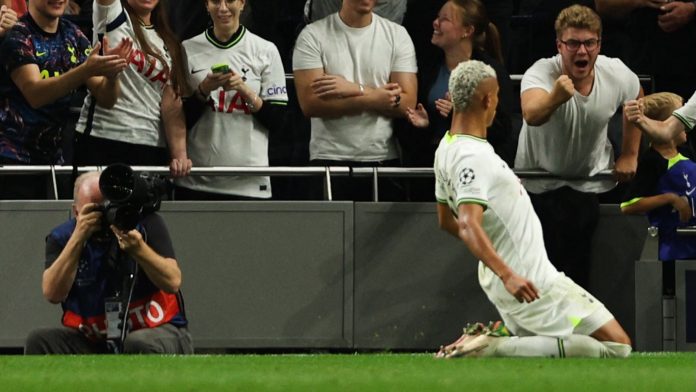 Lisbon: Tottenham Hotspur will take on Sporting CP at the latter’s home ground Estadio de Jose Alvadio at 10:15 pm IST. The match is the second fixture in the Group D of the 2022-23 UEFA Champions League.

Sporting CP is leading the Group D after defeating Eintracht Frankfurt 3-0 in the last fixture. Tottenham on the other hand defeated Marseille. However, the Sporting CP had the better goal difference. “The Greens and the Whites” are currently 7th in Premiera Liga, The top divison football of Portugal with 3 victories, 2 losses and a draw. The Lilywhites is at 3rd having won 4 and drew 2 thus earning 14 points so far.

Antonio Conte’s Tottenham have not been defeated in this season so far. The Spurs will fight tooth and nail to keep the momentum. They have a power packed forward with Harry Kane supported by Heung Son Min. New signings Richarlison and Perisic are also performing in excellent fashion. Richarlison is also looking forward to become the first to score two goals on both the debut two games since Someone in 1996. They also feature the ex-Lisbon player Eric Dier

Conte has made one change from the side that defeated Marseille in the last matchday. Instead of Clement Lenglet, Ben Davies will join the back three.

The Lilywhites have never faced Sporting CP in a European Championship ever. Amorim’s Men have a difficult history with English sides in the Champions League. They lost all six times when they faced any English side. Ex-Spur Player Marcus Edwards might be the star player for Amorim on his squad. Sporting Lisbon who plays without their important defenseman St Justo will aim to back up with other replacement options. On the other hand, Edwards looks forward to show his former squad what they have lost.

The Portugese side attempts to try a chance at rewriting the history. While, the London side aims to extend their unbeaten streak of this season.