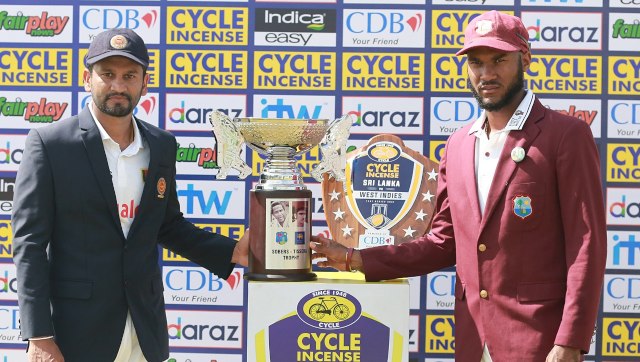 The start of the day’s play was delayed due to rain showers in Galle. West Indies were able to add only 5 runs to their overnight score and Sri Lanka took a lead of 156 runs. Jayawickrama ends with four wickets.

At lunch on day 4, Sri Lanka were in control as they have extended their lead to 240. Nissanka and Oshada couldn’t add much to the total, but Karunaratne has stepped up, and he has played a fine innings so far. He was trapped LBW by Cornwall, but West Indies missed a trick by not opting for DRS. Anyway, the partnership between Mathews and the Sri Lankan captain is looking good.

Karunaratne and Mathews had a magnificent partnership for the third wicket. Karunaratne fell short of his century by 17 runs, and once he departed, Mathews was quick to shift gears. He hit a few lusty blows to take Sri Lanka’s lead closer to the 350-run mark. And  Sri Lanka declare with a lead of 347 runs! SL have done their bit to make sure they don’t end up on the losing side. Most likely a Sri Lankan win, but rain might intervene to spoil their party.

West Indies have a target of 348 runs in their mind with four sessions to spare if there was no rain to interrupt, that was looking very unlikely. Does West Indies able to chase this total? We will see in the final session.

Having set a target of 348, in reply, the Sri Lankan spinners were sensational as they took early wickets, in fact – six of them, as the West Indies were reduced to 18/6 in the 12th over. Ramesh Mendis was unplayable as he claimed four of those wickets. However, since then, Da Silva and Bonner have managed to build a decent partnership. Not much batting left after this, so Sri Lanka need only one wicket to trigger a lower order collapse.

West Indies saw a batting collapse in this session when it was expecting from their batsmen that they would bat sensibly. But West Indian batsmen have this problem. They can’t play the Test Cricket for much time. If you want to attack every ball in Test Cricket, more often you will see collapses.

It was a fantastic day for Sri Lanka who have taken giant strides in this Test on day 4. There’s forecast for rain on day 5 as well, but given Sri Lanka’s position, they should be able to finish things off within a session. The bowlers will be fresh and the pitch is going to deteriorate further.