Top 5 players with the most social media following 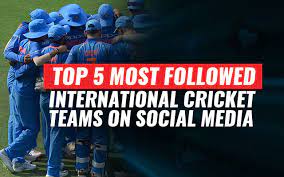 Social networking has become an everyday aspect of everyone’s life in this day and age. With the introduction of Facebook, Twitter, and Instagram, among others, social media is being utilised for various reasons. Social media is used in every aspect of life, from sharing photographs to advertising multiple products. As a result, many cricketers are pretty active on social media. So let have a look at the Top 5 players with the most social media following.

Top 5 players with the most social media following

The ‘Hitman’ cannot be missed out of this list because he is one of today’s most famous cricketers. Rohit Sharma has 19.4 million Twitter followers and over 13.9 million Facebook fans. Rohit is also quite active on Instagram, with 20.8 million followers.

After only Kohli and Tendulkar, the most successful Indian skipper, is the third most following cricketer on social media. Dhoni has 67.5 million followers across social media platforms, including 21.2 million on Facebook alone. On the other side, the 2011 World Cup-winning team captain has 8.3 million and 35.3 million followers on Twitter and Instagram, respectively.

The ‘God’ of cricket’ is second on the list of most followed cricketers on social media, with 96.4 million followers. Sachin Tendulkar has almost 36 million Twitter followers and 28.6 million Facebook fans. On Instagram, the master has 31.8 million followers.