The SportsLiteSports at just one click!
HomeCricketOman Vs Bangladesh Match report and other details| Bangladesh defeated Oman by...
Cricket 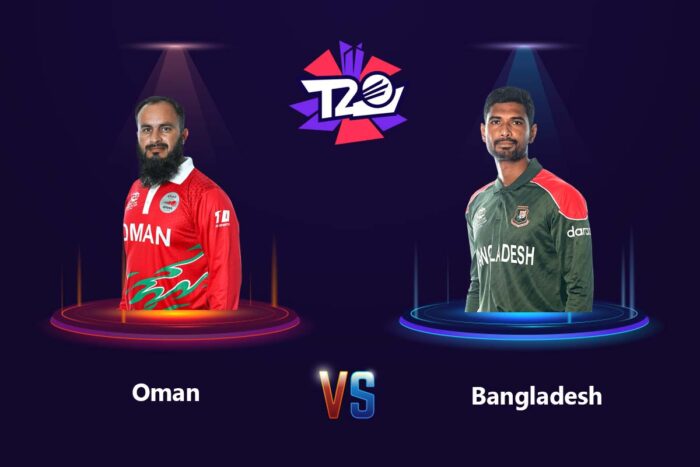 In the 6th match of ICC T20 World Cup, Bangladesh and Oman come against each other. Bangladesh played so well with the early wickets of their Top Order and defeated Oman by 26 runs.

Batting first Bangladesh posted 153 on the board. They started off to a slow start with around 6 runs per over in the first 10 overs. Oman did exceptional bowling. They bowled in good areas and Bangladesh’s batters were never get going in the first 10 overs. But the experienced lad Shakib Al Hasan didn’t let Oman bowlers to settle after 10 overs. He used his experience and scored 42 runs at a good pace. And Mohammad Naim also helped Shakib in scoring runs by scoring a half-century. But at the end of the innings Oman bowlers managed to get wickets and control the run rate and they restrict Bangladesh to a total of 153.

Bangladesh have to fight hard because if they lose this match, this will eliminate them from Qualification race. Oman did lose their opener early with Mustafizur’s inswinger. But Oman managed to score runs at good rate despite losing a couple of wickets in Powerplay. Jatinder Singh played so well and he always keep the scoring rate in check. But he got out to Shakib and that put Oman on the back foot as he was well set. After that Bangladesh’s bowling was just remarkable. They slowed down the scoring rate and also ensured regular wickets.

Mustafizur Rahman and Shakib Al Hasan were the picks of the bowlers with 4 and 3 wickets respectively.

Shakib Al Hasan was adjudged as the Player of the Match award for his all-around performance. And Group B just got a whole lot more interesting after Bangladesh won over Oman.