The SportsLiteSports at just one click!
HomeCricketAlex Hales completes his redemption as England beats Pakistan in the first...
Cricket 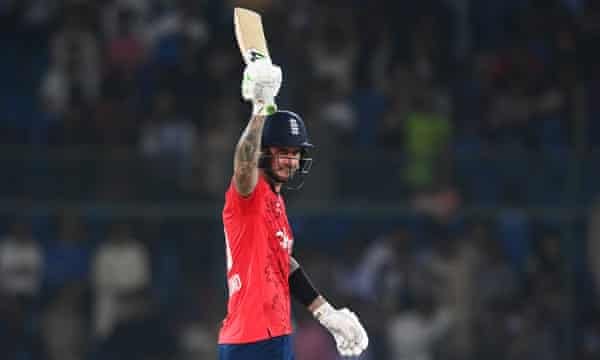 Karachi: England defeated Pakistan by 6 wickets in the first T20I of the seven match series here at Karachi. The match marked England’s return to Pakistan after a long hiatus following the 2008 attack on Sri Lankan buses. Alex Hales who was retuning after a long gap made the news headlines for his masterful opening innings.

After the toss, Stand-In Captain Moeen Ali sent the Men In Green out to bat first. Captain Babar Azam and Number One Mohammed Rizwan put up a solid first wicket partnership until Azam fell at 85. The batters who came after the openers could not follow the momentum and fell easily. Rizwan scored 68 off 46 balls and top scored for Pakistan. English benefitted from the impressive bowling skills displayed by debutant Luke Wood. Wood scalped three in four overs at at net run rate of 4:00. He was later awarded Man of the Match for his performance.

In return, English opened with Phil Salt and Alex Hales. Even Though Salt departed early, Hales stayed to ensure his redemption. The heavily tatted 33-year-old batter smashed 53 off 40 including 7 fours. Harry Brook who is expecting a position in the eleven for the T20I World cup proved his might. Brook drove the ball through the covers of a boundary thus ensuring the English victory at Karachi.

The Pakistan-side led by Azam will play England six more times before the T20I World Cup begins. The impending matches are on 2nd, 23rd, and 25th Septmeber. The Side plays Pakistan goes to Lahore for the final few matches. The English side muscles up against Pakistan at Lahore on Septmeber 28,30 and the final T20I on October 2nd.