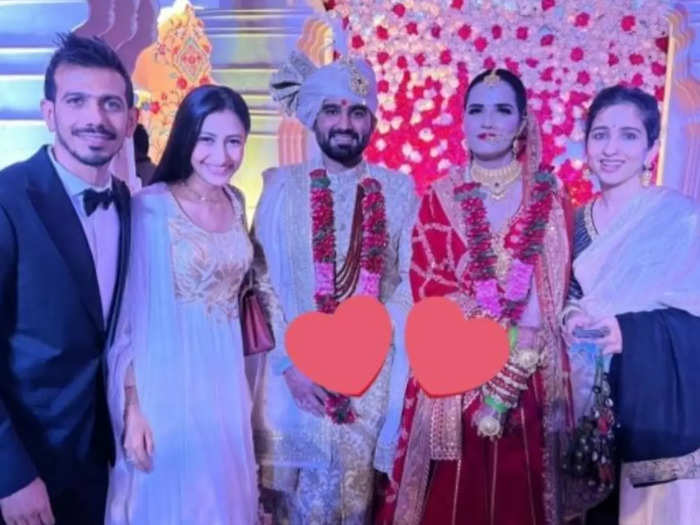 November is the season of weddings in India so why should cricketers lag. In recent days, we have seen many cricketers getting engaged or married. The latest in the list is Rajasthan Royals’ star all-rounder Rahul Tewatia. The 28-year old Rahul Tewatia marries Riddhi Pannu. He has shared her wedding pictures on social media, which are becoming viral. The entire Social media is flooded with congratulatory messages. Notably, the couple got engaged in February earlier this year.

It is worth noting that Rahul Tewatia is an important player of the Rajasthan Royals team. He shot to fame by hitting five sixes in five consecutive balls against Sheldon Cottrell of Punjab Kings in IPL-2020. The way Rahul led Rajasthan Royals to victory in the losing match against Punjab Kings in IPL 2020 is still fresh in the minds of the fans. Chasing the target of 224 runs against Punjab Kings, the team of Rajasthan Royals looked in trouble. In that match, Tewatia played a blistering innings 53 runs off 31 balls and hit seven sixes, out of which five sixes were hit in an over by Sheldon Cottrell. In that match played against Punjab, he gave his team a memorable victory.

He got the reward for his superlative performance in the IPL in the form of a blue jersey when was included in Team India for the T20 series against England this year. However, he did not get a chance to play the match because he couldn’t pass the fitness test. Tewatia had an under the weather sort of IPL 2021. His numbers in IPL 2021 read 155 Runs and merely 8 wickets in 14 matches he played. These numbers don’t do justice to his caliber.

His record in T20 matches has been excellent. Rahul has played a total of 87 T20 matches so far, during which he has taken 54 wickets at an economy rate of 7.42, while scoring 1170 runs at an impressive strike rate of 142.33 and an average of 27.20. It will be interesting to see whether Rajasthan Royals retains Rahul in IPL Retention 2022. Let us tell you that the inaugural champion team of IPL has decided to retain young player Sanju Samson. The remaining three players will be announced on November 30. Let us inform that under the captaincy of Samson, the team of RR was seen struggling last season and was out of the race for the playoffs.

28-year-old Rahul plays for Haryana in domestic cricket and his last outing was in the recently concluded Syed Mushtaq Ali Trophy.