The SportsLiteSports at just one click!
HomeCricket14th July in Cricket History: Dramatic WC final between England and New...
CricketForever FactsToday's in History 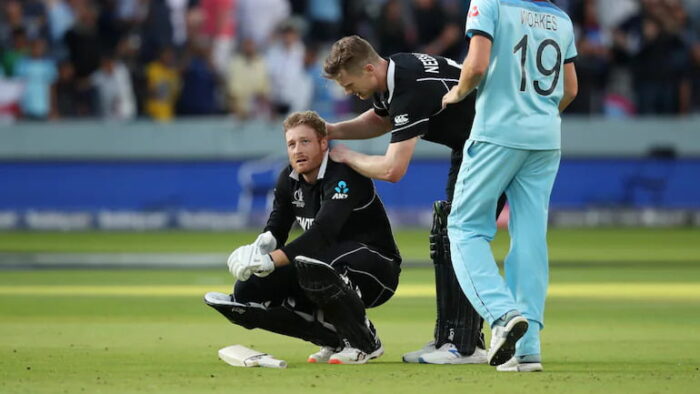 A story of the match between a lucky team and a deprived team: England and New Zealand

If a match goes to super over, whatever may be the result, it will be a very exciting and enthralling match. You can give as many adjectives as you want to such a match and the adjectives, no doubt, would describe how the match was.

But what about the 2019 WC Final between England and New Zealand?

I bet, no one can explain or describe the emotions through which each and every spectator had gone through, doesn’t matter whether you were the England or New Zealand supporter. It was surely the best game in the entire history of cricket.

14th July 2019, wasn’t NZ’s day. Boult caught stokes but stepped on the rope, the ball ricocheted from the stokes bat and went for four, then two super overs and a direct hit on the last ball of the second over, it just wasn’t NZ’s day and was the luckiest day of England’s cricket history.

A small mistake from the umpire and a stupid rule, which has been revoked after the game, ripped NZ apart from the trophy they failed to win in 2015. England won the Final on the boundary count and hence the world will always remember this England and New Zealand match of World cup final.

Also Read: Chris Gayle batting in T20: Let’s have a look at why Chris Gayle is called The Universe Boss

The lowest total for South Africa since readmission

It was the 1st Test of the 2 match series between Proteas and host Sri Lanka.

Dimuth Karunarate’s unbeaten 158(222) and some valuable contributions down the order took hosts to 287/10. Kagiso Rabada took 4 wickets, while Shamsi 3.

SA, bundled out on 126. Spinners, as per expectations dominated the game, Dilruwan Parera took 4. In 2nd innings, Karunanarte, continued the way he had batted in the first innings and scored 60. Sri Lanka bowled for 190 and gave SA a target of 352.

Considering the quick wickets that had fallen in 3 innings, the defeat was inevitable. But 73 all out was also not acceptable. Dilruwan Parera made most of the turning pitch and once again exposed South Africa’s incompetence against spinning conditions.  Parera took 6, Herath 3 and Sandakan one.

SA registered their lowest Test total since the readmission into cricket.