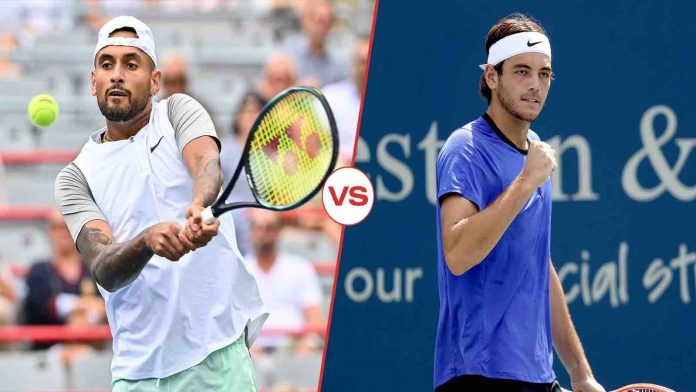 Nick Kyrgios will square off against 11th-seed Taylor Fritz in the second round of the 2022 Cincinnati Open on Wednesday.

Kyrgios has played well this season, winning 31 games while only losing eight. He won the singles and doubles championships at the Citi Open after making it to his first Grand Slam final at Wimbledon, where he faced off for the title. He had just finished in the quarterfinals of the Canadian Open when he arrived in Cincinnati. With 10 aces, the Australian defeated Davidovich Fokina 7-5, 6-4 in the opening round.

13 in the world This year, Fritz is also in excellent shape. He advanced to the Australian Open quarterfinals before winning his first Masters 1000 championship at Indian Wells, when he beat Rafael Nadal in the final. His rising trend continued when he won a second championship at Eastbourne and advanced to the Wimbledon quarterfinals. He just finished competing at the Canadian Open, where he fell to Dan Evans in the round of 16. Sebastian Baez was defeated by Fritz 6-1, 6-1 in Cincinnati’s opening round.

Fritz will rely on his powerful, flat forehand for a chance to come out as the winner but will have to keep his movement and backhand in top shape to counter Kyrgios’ onslaught of drop shots and serve off his weaker side. If Kyrgios keeps up his run of form, he’ll be the favorite to win their second-round encounter.

Prediction: Kyrgios to win in 3 sets