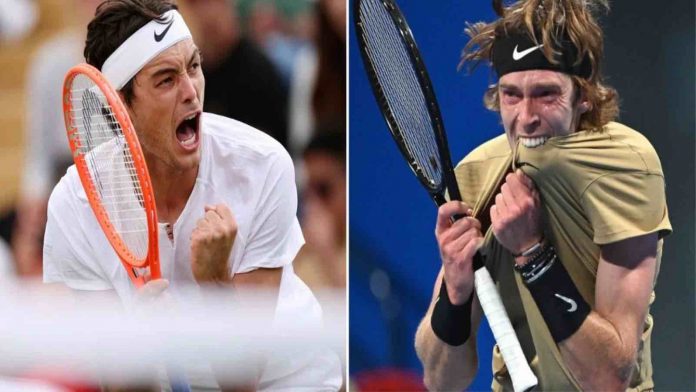 Sixth seed Andrey Rublev will battle it out against 11th seed Taylor Fritz in the third round of the Cincinnati Open on Thursday.

In the second round of the Cincinnati Open, Rublev battled through Fabio Fognini 6-7 (7), 7-6 (3), 6-2. His victory followed a shocking loss to Dan Evans in the opening round of the Canadian Open. The year has been hot and chilly in Russia. Rublev had a strong first half of the season, but his second half has been very modest. His current win-loss record is 36-13. He now has 11 titles total after winning three more this year. The 24-year-old also advanced to the semifinals of the Citi Open, Indian Wells Masters, Swedish Open, and ATP Rotterdam. He also participated in the French Open and Madrid Open quarterfinals, where he lost to Marin Cilic.

Fritz, meanwhile, advanced to the second round with ease after defeating Nick Kyrgios, 6-3, 6-2, in straight sets. The American served 16 aces throughout the match, compared to Kyrgios’s seven, and had respectable match numbers. He had a fantastic year, his finest thus far on the tour. The 24-year-old won two championships this season and achieved a career-high World No. 12 rating. Fritz defeated Rafael Nadal in straight sets at the Indian Wells tournament to win his maiden championship of 2022, 6-3, 7-6. (5).

Taylor Fritz leads 3-2 in the head-to-head against Andrey Rublev.

The American likes to gain extra points by serving aces. He can cut the corners of his opponent’s side with his flat forehand strike. He enjoys controlling the action and will probably fight the other 24-year-old aggressively. Fritz ought to be able to record his fourth victory over Rublev because the Russian has recently displayed a lack of confidence on the court.

Prediction: Fritz to win in 3 sets