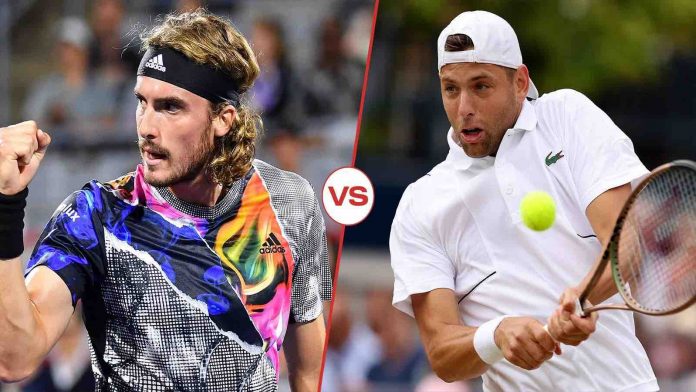 Fourth seed Stefanos Tsitsipas will square off against Filip Krajinovic in the second round of the Western & Southern Open in Cincinnati on Wednesday.

In addition to winning in Mallorca and Monte Carlo, where he was the defending champion, Tsitsipas had a strong season, making it to four finals overall. The Greek’s US Open campaign got off to a rough start in Montreal as he was defeated by Jack Draper. He currently has a two-match losing streak and will want to halt it before the US Open.

Krajinovic has recently enjoyed some success, making it all the way to the Queen’s Club Championships final and the Round of 16 in the Hamburg European Open before falling to Carlos Alcaraz. The Serb got even with Dan Evans, who had defeated him in Montreal, in the opening round of the Cincinnati Masters. On this occasion, Krajinovic was ruthless, defeating the Brit in straight sets, 6-3, 6-4.

The duo have squared off three times on the tour, with Tsitsipas leading the head-to-head 2-1.

In contrast to Evans, Krajinovic appeared to have everything under control, so Tsitsipas will be cautious of the threat he poses. He broke Evans three times during the match and won 86% of the points after his first serve. The Serb can be very difficult to stop while in song. However, Tsitsipas is the more talented of the two and should be able to defeat Krajinovic and advance in Cincinnati.

Prediction: Tsitsipas to win in 3 sets