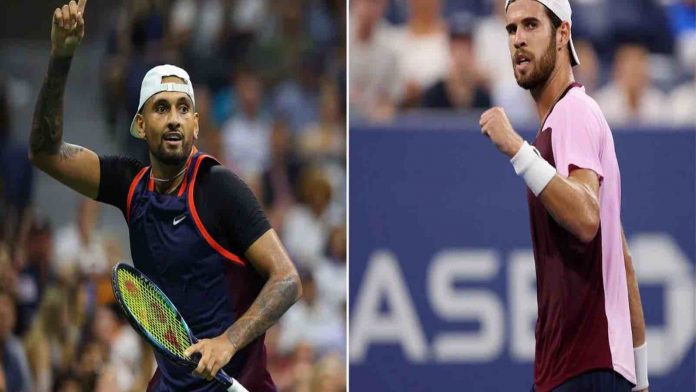 2022 Wimbledon finalist Nick Kyrgios will square off against World No. 31 Karen Khachanov in the quarterfinals of the 2022 US Open on Tuesday.

Kyrgios defeated Thanasi Kokkinakis, Benjamin Bonzi, and J.J. Wolf on his way to the fourth round. Then he faced up against reigning champion and world No. 1 Daniil Medvedev. On his first try, the reigning champion was unable to serve out the set, but on his second try, he succeeded. Kyrgios later won the third set to increase his advantage. In the fourth set, the Australian dominated even more, breaking his opponent’s serve twice to lead 5-1. The match was soon over when Kyrgios served out the victory to win 7-6(11), 3-6, 6-3, 6-2.

Following victories against Denis Kudla, Thiago Monterio, and Jack Draper, Karen Khachanov will play Pablo Carreno Busta in the fourth round. In the very first game of the encounter, the Spaniard broke his rival’s serve. This was more than enough to guarantee that he would win the opening set. In the final set, Khachanov earned the crucial break to take the lead 4-2. When serving at 5-3, Carreno Busta then survived a few match chances, but the Russian won the next game to end the match. He prevailed with scores of 4-6, 6-3, 6-1, 4-6, 6-3.

The pair have split their previous two meetings, with the head-to-head tied at 1-1.

Khachanov has the game to go toe-to-toe with Kyrgios, but the latter is in the form of his life. The Australian has been on a roll over the last few months, and it doesn’t look like he’s going to stop any time soon.