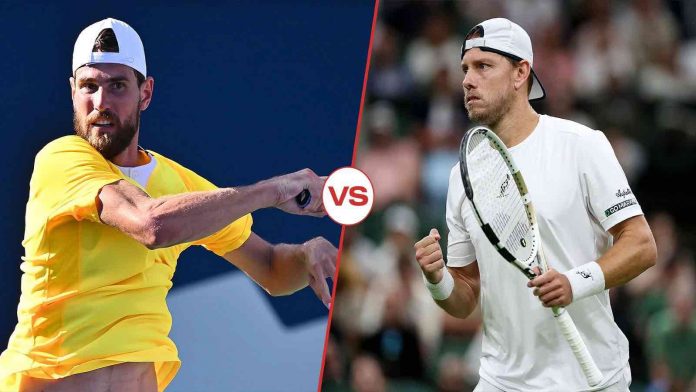 Fourth seed Maxime Cressy will face James Duckworth in the second round of the Winston-Salem Open on Tuesday.

Cressy won his first ATP singles championship at the Hall of Fame Open in Newport after winning 21 of his first 40 matches this season. He defeated John Isner, Steve Johnson, and Mitchell Krueger before defeating Alexander Bublik in the championship match 2-6, 6-3, 7-6(3). Cressy advanced to the Citi Open’s round of 16 but fell to Andrey Rublev. The 25-year-old then defeated Aslan Karatsev to go to the second round of the Canadian Open. Gael Monfils, though, defeated him 7-6(10), 7-6(6).

Duckworth has only triumphed in four of his 16 matches thus far this season, with his best performance coming at the Newport Hall of Fame Open. The Australian lost to fellow countryman Jason Kubler in the ATP 250 quarterfinals. The 30-year-old then participated in the Atlanta Open and advanced by defeating Dominik Koepfer to the round of 16. Alex de Minaur, the eventual winner, defeated him. Duckworth was unable to qualify for the Canadian Open because of her Citi Open loss to Borna Gojo in the first round. Later, the Australian took part in the Winston-Salem Open and advanced to round two by defeating Thanasi Kokkinakis 4-6, 6-3, 7-6. (5).

Cressy has put a lot of effort into improving his all-around play this season and is less reliant on his enormous serve. Duckworth hits his groundstrokes far and has a good serve. The Australian is a scrapper who tries to wear down his rivals. He would have felt very confident after defeating Kokkinakis in the opening round. Although a lot will depend on Cressy’s serve, the American should win easily.