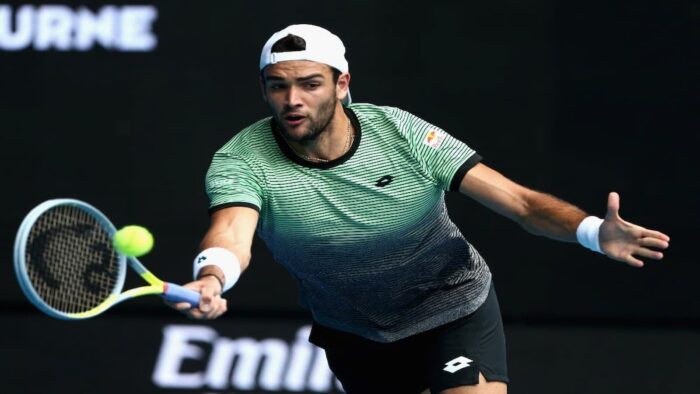 On Tuesday, Italian Matteo Berrettini was the instructor and the Brisbane United Cup press conference room served as the classroom. Following Italy’s draw victory over Norway, 14 local junior Australian players watched the team’s news conference. The 26-year-old went into deep contemplation when asked what advise the World No. 16 Berrettini would give them.

“I think I was really lucky because I met this guy when I was 14,” Berrettini said of his coach and Team Italy captain Vincenzo Santopadre. “I’m always joking around, but, I mean, I have to thank him. I never thank him enough for what we did together.

Through the highs and lows of his career as a professional tennis player, Matteo Berrettini said he has learnt the value of loving what he does.

But the Italian was not done. He saved perhaps the most valuable lesson for last. Also Read: Tennis Legend Martina Navratilova has been diagnosed with throat and breast cancer

Take Out the Best Even From Your Bad Days Says Berrettini

“I think the most important thing for me at least was I always say that every day I put a brick in my wall so I feel like even when I’m losing, doesn’t matter, I feel I have to learn something from what happened. think that’s the advice I’m going to tell them. So even the worst days, feel that something good happened and take that good and try to improve.”

The floor was opened to questions from the junior players and one 15-year-old volunteered to ask Berrettini one.

That’s a great question, actually. The pressure never goes away. Doesn’t matter if you’re Grand Slam champion, which I’m not, or a Top-10 player. It’s always there,” Berrettini said. “Yesterday night I was talking to my coach. I felt a lot of pressure, not just for this match but for the season. The season is starting. Last year was a tough year. It’s always there. Like I said, it’s learning from who you are. From the stuff you’re doing, you try to learn yourself in a way.