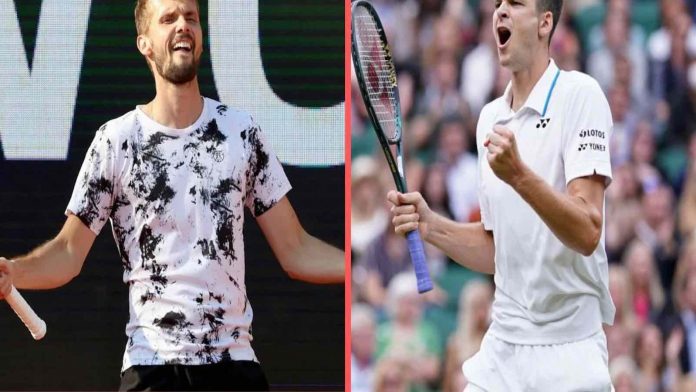 World No. 10 Hubert Hurkacz will face off against Oscar Otte in the first round of the US Open on Tuesday.

Hurkacz has had a successful year. Both the Miami Open and the Dubai Open saw him reach the semifinals until Carlos Alcaraz eliminated him. At the Halle Open during the grasscourt season, the 25-year-old defeated World No. 1 Daniil Medvedev to win his first and only championship of 2022. Hurkacz rebounded at the Canadian Open after a pair of mediocre performances, making it to the final where he was defeated by Pablo Carreno Busta. This year, the Pole has accumulated 32 victories and 15 defeats. He last competed at the Cincinnati Masters, where he was defeated by John Isner in the first round.

Otte, on the other hand, has seen a significant improvement in his ranks this year. The German improved from being ranked 101st in the world at the beginning of the year to a career-high of 36th. On the charts, he is now ranked No. 41 in the world. His quarterfinal performance at the Serbia Open, followed by semifinal advancement at the Bavarian International, the Stuttgart Open, and the Halle Open, added some colour to the German’s otherwise unimpressive calendar. The 29-year-old lost to Alcaraz and was eliminated from Wimbledon in the third round. As he was sidelined due to a knee injury, this was his penultimate match before competing in the US Open. At the US Open the previous year, he advanced to the fourth round.

Hurkacz leads 1-0 in the head-to-head against Otte.

Otte is a smart player who will attempt to react to Hurkacz’s returns and change things up right away. However, because of his ailment, he will play his first hardcourt match of the North American swing. In the best-of-five format, this is probably going to be his undoing, and Hurkacz should be able to easily claim the victory.