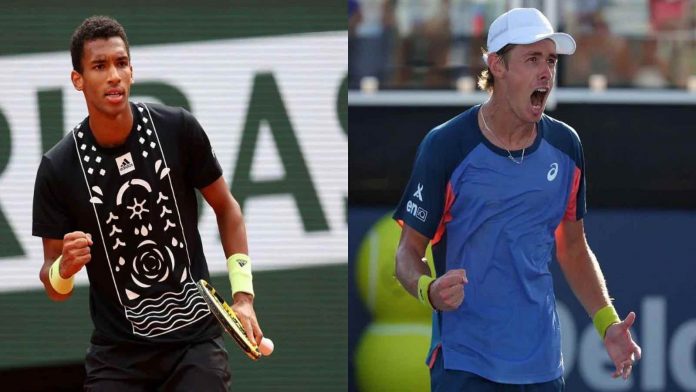 Seventh seed Felix Auger-Aliassime will face Alex de Minaur in the second round in Cincinnati.

So far this season, Auger-Aliassime has triumphed in 34 of the 53 games. He triumphed at the Rotterdam Open this year, defeating Stefanos Tsitsipas in the championship match. He played a crucial role in Canada’s ATP Cup victory. The Australian Open, Madrid Open, Italian Open, and most recently, the Canadian Open, have all seen the Canadian advance to the quarterfinals. In Toronto, Auger-Aliassime defeated Yoshihito Nishioka and Cameron Norrie before falling to Casper Ruud in the round of eight, 6-1, 6-2.

De Minaur has won 35 of 53 games this season. His lone championship came from winning the Atlanta Open, when he defeated Jenson Brooksby 6-3, 6-3. The Aussie was later eliminated in the second round of the Citi Open after falling to eventual runner-up Yoshihito Nishioka by scores of 3-6, 7-6(6), and 6-2. After defeating Denis Shapovalov and Grigor Dimitrov, he advanced to the round of 16 at the Canadian Open before falling to fellow countryman Nick Kyrgios 6-2, 6-3. The 23-year-old then competed in the Western & Southern Open in Cincinnati, where he defeated Henri Laaksonen 6-2, 6-2 to advance to the second round.

The head-to-head between the two players is 0-0

De Minaur has had some good moments so far this season and will put up a tough fight. However, Auger-Aliassime’s aggression might just be able to see him come out on top.

Prediction: Auger-Aliassime to win in 3 sets