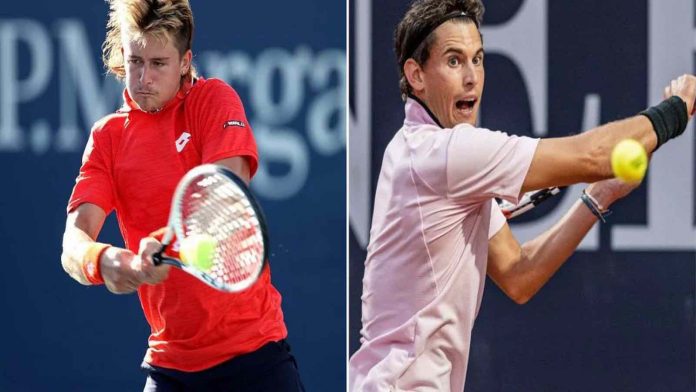 Former World No. 3 Dominic Thiem will battle it out against American wildcard Jeffrey John Wolf in the first round of the Winston-Salem Open.

Dominic Thiem’s season this year hasn’t been great. The Austrian made a comeback in March after missing a year owing to complications from a wrist injury. So far, he has seven victories and nine defeats. At the Swiss Open, where he advanced to the semifinals, Thiem achieved his highest performance. He was defeated by Italian Matteo Berrettini 6-1, 6-4 in the match. The 28-year-old appeared to be returning to his winning ways, but he experienced a setback when he was forced to withdraw from the Cincinnati Open because of a respiratory virus. He has taken a wildcard at the Winston-Salem Open despite having a current ranking of 228. It will be his first match since losing to Yannick Hanfmann 6-4, 3-6, 6-4 in the Kitzbuhel quarterfinals.

Jeffrey Meanwhile, John Wolf has made some kind of progress. He started the year outside the top-200 and is currently ranked at a career-high World No. 83. With wins over Lorenzo Sonego, Lorenzo Musetti, Jenson Brooksby, and more recently Denis Shapovalov and Holger Rune at the Citi Open, Wolf has been able to pull off some significant upsets. The 23-year-old has so far recorded seven victories compared to six losses. His finest performance came in the Citi Open quarterfinals, where he entered as a wildcard and defeated Denis Shapovalov, Taro Daniel, and Holger Rune before falling to Andrey Rublev 6-2, 6-3 in the final eight. Wolf will enter the Winston-Salem Open as a wildcard participant and will do so from behind

Thiem and Wolf will meet for the first time.

Dominic Thiem will compete in his first match in almost a month, so he could not be fully prepared. Thiem is ideally a very dangerous player who moves quickly on the court. He regularly uses his one-handed backhand, which is regarded as one of the greatest on the tour, to blast winners down the line at high speeds. Wolf, on the other hand, is eager. He doesn’t avoid the net and can score goals with good net play. The American also gets free points by serving. Despite being a tremendously skilled tennis player, Thiem will be playing his first hardcourt match of the year, which could be his downfall.

Prediction: Wolf to win in 3 sets