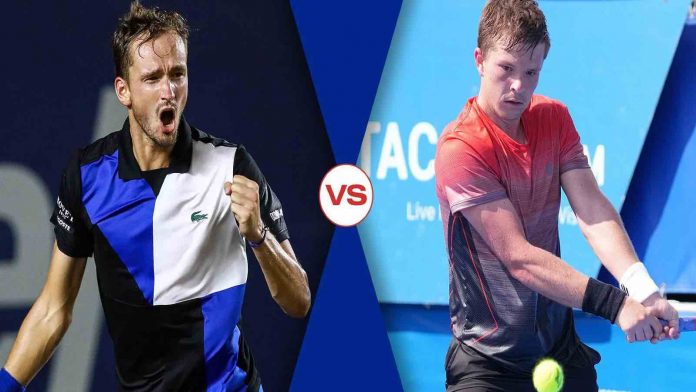 World No. 1 Daniil Medvedev will commence his US Open title defense against American Stefan Kozlov on Monday.

Medvedev led Russia to the ATP Cup semifinals to start the year. At the Australian Open, he came close to winning his second Grand Slam championship, but Rafael Nadal defeated him in five sets. After leaving Indian Wells early, Medvedev advanced to the Miami quarterfinals. After returning from injury, the Russian was defeated in the opening round of the Geneva Open. Because Russian players were prohibited at Wimbledon, Medvedev was unable to participate. At the Los Cabos Open, he captured his first championship of the year. Later, in the second round of the Canadian Open, the 26-year-old was defeated by Nick Kyrgios. In Cincinnati, where he lost to Stefanos Tsitsipas in the semifinals, Medvedev displayed considerably better play.

Stefan Kozlov is currently having his greatest season ever. At the Australian Open, he played in his first Grand Slam match and advanced to the second round. Despite dropping out of Wimbledon’s qualifying rounds, he was a lucky loser who advanced to the main draw, making this his first time competing in the grasscourt Major. The second notable performance by Kozlov this year was a quarterfinal finish at the Delray Beach Open. His performances, though, have been quite poor in the run-up to the US Open. He was eliminated in the first round of the Citi Open and was unable to go through the qualifying rounds in Cincinnati and Atlanta.

This will be the first meeting between Medvedev and Kozlov, so the head-to-head stands at 0-0 for now.

Medvedev has played a rather consistent game. In terms of service games won this year, he has been serving effectively and is currently placed sixth on the ATP tour. From the baseline, he can compete with anyone, but Kozlov prefers to mix it up occasionally rather than being pinned to the back of the court. But given the enormous gap in their abilities and accomplishments, Medvedev has a high chance of beginning his title defence with a decisive victory.