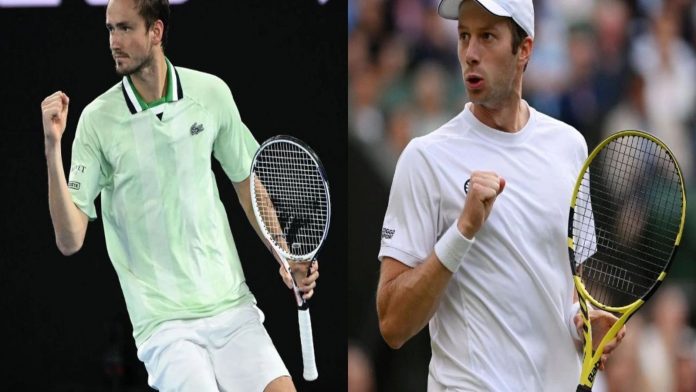 World No. 1 Daniil Medvedev will face Botic van de Zandschulp in the second round of the Western & Southern Open in Cincinnati on Tuesday.

The Russian has prevailed in 31 of his 42 contests thus far this year, including the Los Cabos Open, which he won by defeating Cameron Norrie 7-5, 6-0. In the earlier part of the year, Medvedev advanced to the Australian Open final but fell to Rafael Nadal. After winning at Los Cabos, the 26-year-old had a dismal title defence at the Canadian Open, falling to Nick Kyrgios in the second round by scores of 6-7(1), 6-4, and 6-2.

In contrast, Botic van de Zandschulp has prevailed in 28 of his 48 contests thus far. His finest performance was at the BMW Championships in Munich, where he competed all the way to the championship match before quitting due to injury against Holger Rune. Additionally, the Dutchman advanced to the Queen’s Club Championships semifinals before falling to eventual champion Matteo Berrettini. Van de Zandschulp began his run at the Western & Southern Open with a strong victory over Maxime Cressy, winning 6-2, 4-6, 6-4. He had previously lost in the second round of the Canadian Open.

Medvedev leads 2-0 in the head-to-head against van de Zandschulp.

The Dutchman has a big serve and it is imperative that he uses it accurately and effectively. Van de Zandschulp likes to finish points quickly, but he might have trouble doing so against the Russian, which could lead to a high error count.

Medvedev has beaten the Dutchman comprehensively in their two previous encounters and will be confident of doing the same in Cincinnati.