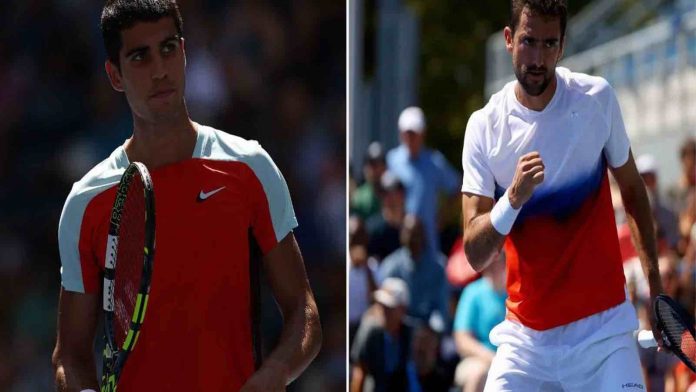 Teen star Carlos Alcaraz will face off against World No. 17 Marin Cilic in the fourth round of the 2022 US Open on Monday.

Prior to Sebastian Baez’s forced retirement in the opening round, Alcaraz had a two-set advantage. In the second round, he played Federico Coria, another Argentine, and won in straight sets. In the third round, the kid faced up against local favourite Jenson Brooksby. After then, Alcaraz won six straight games to take the match 6-3, 6-3, 6-3 and advance to the fourth round for the second consecutive year.

Maximilian Marterer and Albert Ramos-Vinalos were defeated by Marin Cilic in straight sets to start his bid for a second US Open victory. The 23rd-ranked Dan Evans was his opponent in the third round. In the third set, Cilic improved, twice breaking his rival’s serve to win it. In the fourth set, both players maintained strong serves, but Cilic broke Evans’ serve in the decisive game to win 7-6(11), 6-7(3), 6-2, 7-5.

Alcaraz leads Cilic 2-1 in the head-to-head.

The former US Open champion is still a massive threat, but Alcaraz should be able to overcome the challenge posed by him.

Prediction: Alcaraz to win in 4