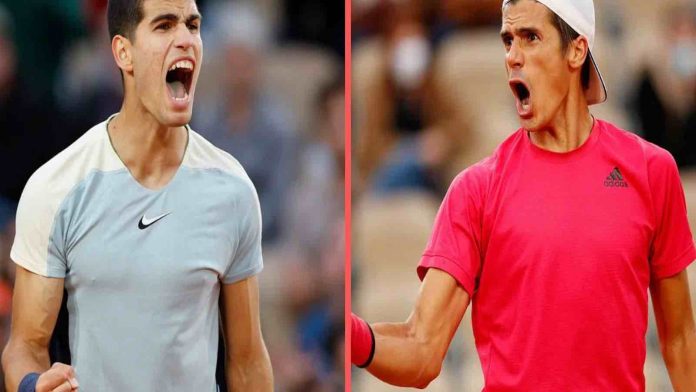 Third seed Carlos Alcaraz will take on another Argentine, Federico Coria, in the second round of the US Open on Thursday.

Sebastian Baez of Argentina withdrew midway through their first-round match, and Alcaraz was declared the victor. With a break in the third set, Alcaraz had a two-sets-to-love advantage, and the Spaniard ultimately prevailed 7-5, 7-5, 2-0 (ret.). Baez gave the adolescent a fierce challenge, and the pair produced spectacular rallies throughout the match. The past year for Alcaraz has been nothing less than remarkable. So far, he has 45 victories and nine defeats. When he played in his first US Open in 2021, the Spaniard was rated No. 55 in the world. Alcaraz entered the current edition as the third seed and No. 4 in the world. This year, he has won four titles, including two Masters 1000s.

In contrast, Federico Coria has a record of 15 wins and 17 defeats. At the Argentina Open, where he made it to the quarterfinals, he achieved his first noteworthy accomplishment. He advanced to another quarterfinal in Rio the following week. Coria improved his performance by making it to the Grand Prix Hassan II semifinals. He made it to his third quarterfinal at the Lyon Open. The Argentinean had just lost in the first round of the Winston-Salem Open when he arrived at Flushing Meadows. In the first round of the US Open, he faced Dutchman Tallon Griekspoor and won the match 7-5, 6-4, 6-3.

Coria leads 1-0 against Alcaraz in their head-to-head stats.

Even though the 30-year-old Argentine defeated the youthful Spaniard in 2020, Alcaraz has significantly improved since then. The teenager’s well-placed shots will all be attempted to be returned by Coria, who may find it difficult to keep up with his more complete game. Alcaraz, one of the favourites to win this competition, ought to be able to beat Coria and earn his first victory.