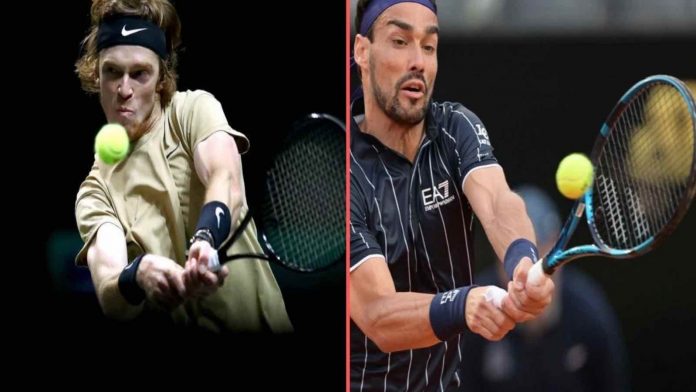 This season, the Russian has triumphed in 35 of 48 games, including three tournament victories. Rublev advanced to the Open 13 final in Marseille, where he defeated Felix Auger-Aliassime, a promising Canadian player, 7-5, 7-6(4), to win the tournament’s first trophy of the year. The World No. 8 then participated in the Dubai Tennis Championships’ second straight final. He defeated Hubert Hurkacz and Daniel Evans among others to advance to the final against Jiri Vesely, whom he defeated 6-3, 6-4. The 24-year-old maintained his strong play as he advanced to the Indian Wells Masters semifinals. In the tournament’s second-to-last match, the Russian was defeated by Taylor Fritz. In his last appearance on the court, the fifth-seeded Russian had a forgettable first-round exit at the hands of Dan Evans at the Canadian Open. However, he had an impressive run at the Citi Open, where his run was ended by Yoshihito Nishioka in the semifinal.

Just 14 of Fognini’s 30 games so far this season has he won. The 35-year-old has participated in two semifinals. The experienced tennis player lost to Carlos Alcaraz of Spain, a rising star, in the semifinals of the Rio Open 6-2, 7-5. The Italian fell to Rublev in straight sets at the Belgrade Open semifinals, where it was his second semifinal appearance. The home favourite Federico Delbonis defeated Fognini in the quarterfinals of the Argentina Open, ending his spectacular run. The veteran is in good form this year in Cincinnati, though. Fognini, who qualified for the competition, did well by winning the qualifying round and the first round, respectively, to set up a matchup with Andrey Rublev.

The pair have faced each other 10 times in the past, with the head-to-head being tied at 5-5. Rublev won their most recent clash in the Serbia Open semifinals, 6-2, 6-2.

Both athletes have a propensity to lose their composure in stressful situations during significant games. Fognini, who prefers clay courts, might have the advantage given on his recent results, but Rublev’s aggressive style might be too much for the Italian, who was sluggish in his match against Ramos-Vinolas. Rublev is the favourite to advance to Cincinnati’s round of 16 unless he falters in the middle of the match.