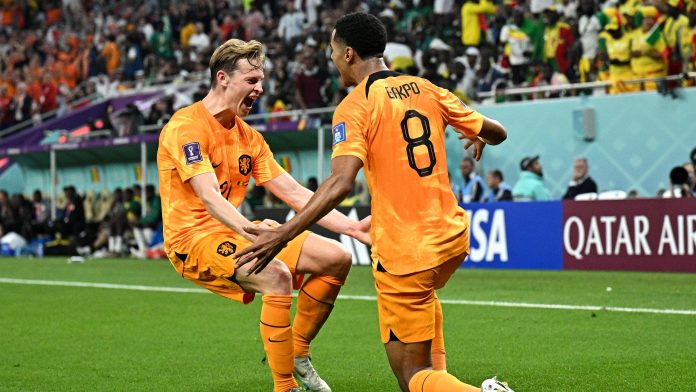 The Netherlands defeated Senegal at the Al Thumama, by a margin of 2-0. The Dutch and Ecuador shares first place with the same points and goal difference in the Group A Table.

The game, marred by English antics at Khalifa, did not thrill fans as one would have thought. The scorecard remained 0-0 for almost 3/4th of the match. The Dutch created chances in the early beginnings of the match. Cody Gakpo committed Mendy with a challenging shot in just the 4th minute. Additionally, The Orange led in all of the first halves with multiple chances in the very first twenty-five minutes. The game remained goalless and pretty boring throughout the first half and 30 minutes into the second half.

In the 84th minute, Frenkie de Jong directed a pass into the box, and PSV striker Gakpo slid it past Mendy to break the deadlock. In the extended extra time of 9 minutes, F de Klaasen added a goal to the goal count. The Dutch swished past the Senegal defense breaking them twice in the last few minutes of the game. The Dutch although got the magical three points, they didn’t wallop Senegal as one hoped for. There were dents in the squad as they failed to convert the chances into goals. Not only the form was missing from the eleven, but also the spirit of Holland.

The Netherlands won the match but in terms of stats, Senegal isn’t that bad. The possession percentage is almost equally divided between Senegal and Netherlands. Furthermore, The defense of Senegal should be congratulated for their precise tackling and brilliant.

The Dutch will move to the next round with happy smiles. They have three points and are topping the group. Senegal is their toughest nemesis in the group. If the Maroons and La tri doesn’t pull off miracles, the Netherlands will squish into R16 pretty easily.