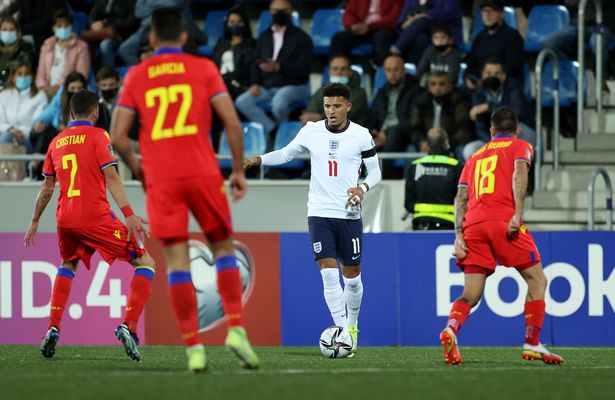 The Three Lions declared the 26 men contingent for the upcoming World Cup yesterday. Among the star-studded squad, People missed Manchester United’s Jaden Sancho. Sancho, 22 has been a golden boy of international football in the past few years after success in United and Dortmund.

Jaden Sancho has been struggling with his form lately. He has been tacky and has not shown much promise in the last few outings. According to the Telegraph, his form is not the sole reason he is not making the Southgate Squad for the Qatar Carnival. Sancho was reported to be late for a team meeting back in 2021. His unpunctual appearance delayed the meeting and Southgate took notice of this. Apparently, the team meeting ahead of Andorra, the same one, is Sancho’s last outing in the national gear.

Jaden did not start for the English in any of the friendlies nor the Nation League. It is not the first instance, “timekeeping” has been attached to Sancho’s name. During his Under-19 times, lateness has costed him a game on the bench.

Gareth Southgate addressed the squad and the key missouts later in the press conference. He admitted that it was difficult to leave players like Sancho home. The influential coach who led England to quite a few accolades in the recent past added that the featuring the best and in-form eleven as possible.

“My priority always on these days is the difficult conversations and the sad news, and that is really tough. There are not many situations in football harder than that, maybe releasing a young player at the early stages of their career,” The Lions coach added in his address.

Read about the 26-men English contingent, possible lineups, captain and much more here