The SportsLiteSports at just one click!
HomeCricketTop 5 Highest Team Total by India in T20 International
CricketListicles

India has latestly registered an enormous score of 237 against South Africa in Guwahati because of Absolutely barbaric hitting by Suryakumar Yadav, Virat Kohli's actively scored almost half-century, and a quickfire half-century by KL Rahul. 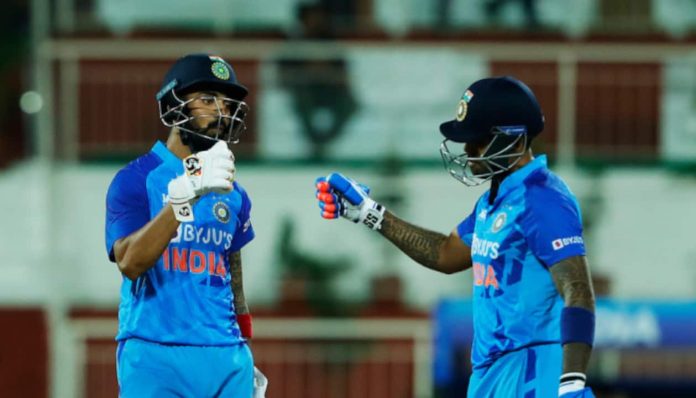 The shortest game format, T20s suits the Indian team very well. The winners of the first-ever T20 World Cup in 2007, they’ve never exactly performed as the underdog in the format. Though yet on the lookout for their second World Cup win, India has dominated most of the games they’ve appeared in, especially in bilateral series.

India has latestly registered an enormous score of 237 against South Africa in Guwahati. Absolutely barbaric hitting by Suryakumar Yadav, Virat Kohli’s actively scored almost half-century, and a quickfire half-century by KL Rahul, all were witnessed solely within this game. Individual scores that high ought to push the team total par 200. This team total is now enlisted as their fourth-highest T20I score. Now that the fourth-highest slot has the latest addition, let’s take a look at Team India’s Top 5 highest total in T20Is.

India’s highest T20 international total was scored against Sri Lanka on December 22, 2017. On the 2nd T20I scheduled in Holkar Stadium of Indore, during Sri Lanka’s tour of India, the Indian team set a gigantic score of 260. Captain and opener Rohit Sharma etched a historic century as he scored 118 runs off just 43 deliveries. KL Rahul, on the opposite strike, excellently played his part as he scored 89 off 49 balls. India ultimately won the match by 88 runs against the guest team.

India’s second highest T20I score came while chasing a score of 245 set by the West Indies. The total was scored in the first T20I in Lauderhill during India’s tour of West Indies in 2016. India lost to the hosts but not before registering a 244 on the scoreboard. KL Rahul rose to the occasion with his centurion stand of 110* off 51. However, India lost by 1 run as the then captain MS Dhoni fell prey to a catch-out at the score of 43 off 25 at the last ball.

Another one against West Indies, this one in a winning cause, during the 2019 West Indies tour of India. India set a total of 240 in the 3rd T20I at the Wankhede Stadium against the guest team. Scored at a fall of three wickets, the top order came up with individual masterclass innings to perch up the score that high. Captain Virat Kohli scored 70* off just 29, as the opening pair of Rohit Sharma and KL Rahul scored 71 off 34 and 91 off 56 respectively.

The latest heroics by the Indian team against guest South Africa. The second and decider T20I in Guwahati witnessed India scoring 237 at the loss of 3 wickets. Opener KL Rahul scored a quickfire half-century with a total of 57 off 28. The next moment, the crowd saw Suryakumar Yadav, currently, in the form of his life, bring about an absolute carnage of a performance. Yadav scored 61 off mere 22 deliveries before falling down to a run-out. SKY shot 5 sixes and equal fours to take the house down with yet another electric performance.

Virat Kohli pitched in as well with an eye-pleasing stand of 49* off 28. Captain Rohit Sharma scored 43 off 37 as Keshav Maharaj claimed his wicket in an Lbw. The first inning was sealed by another crackling cameo by Dinesh Karthik. Karthik scored 17* off 7 to take the total to 237.

Another recent one by Team India during their tour of Ireland in June 2022. Captained by maiden IPL-winning skipper Hardik Pandya, India faced the hosts in the second T20I in Dublin. Youngster Deepak Hooda registered his maiden international century in only his fifth overall T20I match. His 104 off 57 combined with the score of 77 off 42 by Sanju Samson pushed the total to 225, India’s fifth-highest T20I score. However, Ireland didn’t come slow as they gave a real threat scoring 221 themselves before ultimately falling down to the guests.