The SportsLiteSports at just one click!
HomeCricketKl Rahul Slyly Replies when asked if Virat Kohli should Open in...
Cricket

KL Rahul is not ready to sacrifice his position in the Indian team for Virat Kohli. 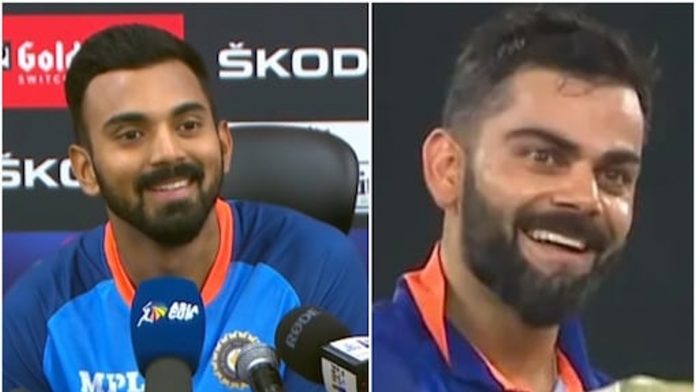 Asia Cup 2022: In the absence of Indian captain Rohit Sharma, KL Rahul and Virat Kohli opened the Indian innings against Afghanistan. Both of them laid an essential foundation for Indian contingent. Which helped India put up a massive target of 212, eventually India won the match with 101 runs. Rahul scored an impressive knock of 62 runs, whereas, Virat scored an unbeaten 122 off 61. However, KL Rahul was not very pleased when asked if Virat Kohli should be opening for India in T20Is. See what he said.

With the help of Virat’s brilliant knock and Bhuvneshwar Kumar‘s five-wicket haul, India defeated Afghanistan, who was considered the ‘dark-horse’ of the Asia Cup 2022. However, both India and Afghanistan are out of the tournament. As Pakistan and Sri Lanka have already booked a spot in the finals. Nonetheless, Indian fans are very happy to see their King back in form, especially, ahead of the ICC T20 World Cup.

After the match, a journalist questioned Rahul whether Virat Kohli should be considered for the role of opener batter, regarding how he has performed for Royal Challengers Bangalore in the IPL and the 122* knock against Afghanistan. Additionally, Kohli has five centuries in the IPL. All of them came while batting in the opening position for his franchise.

To this question, KL Rahul obliquely replies, “Toh kya main khud beth jaun? (So what? Should I sit out?)”

However, he applauded former captain for his brilliant knock and state how important Virat’s form is for team India. He also stated that Virat doesn’t necessarily require to open the innings to score centuries, he can do it batting on no. 3 as well.

“Obviously, Virat scoring runs is a huge bonus for the team, and the way he played today against Afghanistan, I know he is very very pleased with how he batted today. He has been working on his game and that worked beautifully today. As a team, it is important for every player to get time out in the middle. You get confidence if you play 2-3 innings, really happy that he could play that way. You all know Virat Kohli, you have been watching him for so many years, it is not like he will only score centuries if he opens the batting, if he bats at No.3, he can then also score centuries. It is all about roles and what role a certain player has.”

KL Rahul further added, “The role Virat had today, he played it beautifully. In the next series we play, his role would be different.”

Rahul addressed Kohli’s rendition in the continental tournament, especially against Afghanistan. The innings was studded with 12 fours and 6 sixes. His strike rate in this Asia Cup edition has been good enough to shut his critics’ mouths. With this century, he brought up his first international century since November 2019. After a couple of years of criticism on his rough patch, Kohli had a visible sense of relief on his face, commented Rahul.

“Obviously, the celebration by Virat was more of relief. There has been no change in his mindset, attitude, and work ethic in the last 2-3 years. There has been no difference in the way he prepares for the game. He has always had that desire, I think we are also very obsessed with numbers, obsessed with those three digits and we think, if someone is scoring hundreds, then only he is in form. His contributions have been phenomenal in the last 2-3 years,”

“As a player, you always want to be perfect or you want to challenge yourself towards excellency, he has always been that player. Even during this phase, he has remained in the moment and he has worked on his game. That has been a learning for our entire group,”

“In that dressing room, none of us are surprised to see what he has done today. I am sure this will give him even more confidence, he will obviously cherish this hundred and this will build a great confidence around the group as well.”

Asia Cup 2022 might have been a disappointment for the Indian fans, but we are all happy to see Virat Kohli back in his original form. However, there are numerous faults that Rohit Sharma and his team would like to alter ahead of the ICC T20 World Cup. Which is to be held later this year in Australia.