The SportsLiteSports at just one click!
HomeCricket20th July in Cricket History: Harmanpreet Kaur ruins Australia’s hopes for another...
CricketToday's in History 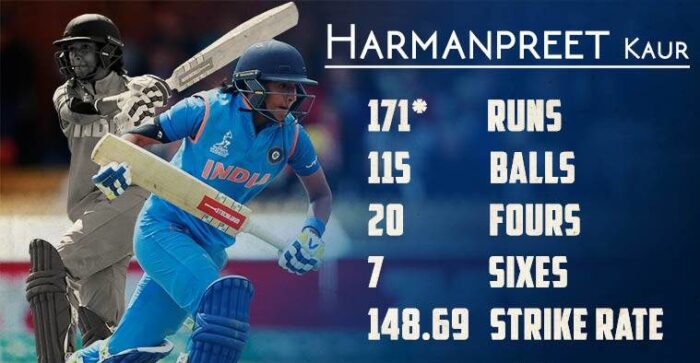 The 2017 WC gave Indian women’s cricket, the glamour, the fame and the respect they deserved for so many years. Since then the performance graph is only rising one. Though they lost in the final, reaching the final was not any lesser achievement. The innings which propelled Indians to the final was from Harmanpreet Kaur and it was played on 20th July 2017.

Australia did possess a serious batting lineup and while setting the score in 1st innings of the Semi-Final, India were struggling at 35/2. Harman with captain Mithali Raj built a nice partnership of 66 runs in 15.4 overs. When Mithali got out, the score was 101/3 in 25 overs.

India were in desperate need of some very quick runs, otherwise, Australians could have chased a smallish target very easily. Harman had her eyes in during the partnership with Mithali and now it was time to take off.

The take off by Harmanpreet Kaur

Suddenly, she went berserk. She unleashed the long levers that she had, ripped the Aussie bowling. The match was reduced to 42 overs due to rain. So from the 25th over till the last ball of the 42nd over, India scored 180 runs. Harman never lowered the gear and scored 171 runs in just 115 balls with 15 fours and 7 maximums at a mighty strike rate of 148.70.

India into the Final

India made 281/4 in 43 overs. The all-around bowling performance from Indians restricted Aussies to 245 by taking all 10 wickets. India entered the WC Final in grand style. No need to tell who was the Player of the match, one and only Harmanpreet Kaur.