The SportsLiteSports at just one click!
HomeCricket21st July in Cricket History: India’s triumph at Lord’s after 28 years
Cricket 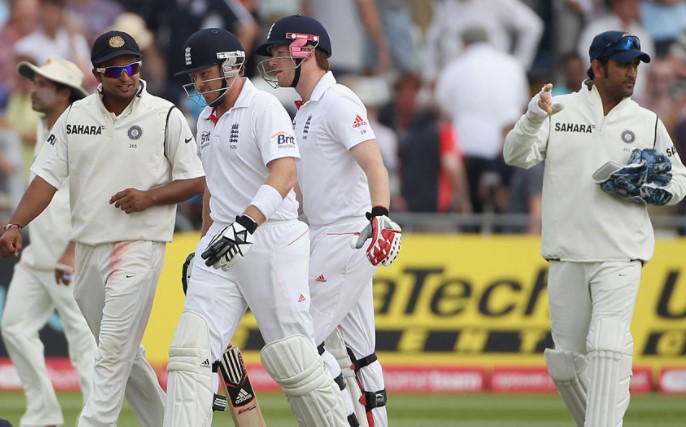 India’s triumph at Lord’s after 28 years

India were battered and bruised in the previous series against England in 2011. In this series they had the squad without the players like Dravid, Laxman and Sachin. So expectations were pretty low.

The first Test at Trent Bridge was a dull Test match due to unsporting pitch and it ended in a draw. the 2nd Test match was at the Home of cricket, The Lord’s.

Rahane’s exquisite century, Bhuveneshwar’s resilient batting took India to 295/10. Garry Balance’s century was studded with splendid back foot punches and cut shots. Other batsmen got the start but failed to register a decisive individual score. A quick fifty from Liam Plunket helped the hosts to take a minor lead of 24. Bhuvneheswar Kumar used the swinging condition exceptionally well and took 6-82. The first four top order batsmen had the same nemesis, Bhuvneshwar Kumar.

India turned the screw in the 2nd innings.. Murali Vijay’s stylish but patient 95 along with Shikhar Dhawan’s 31 gave India a good start. Pujara’s 43 from 83, kept England from rendering a batting collapse. However, a sort of batting collapse did happen, but rescued by Ravindra Jadeja and Bhuvnehswar Kumar. A 99 run partnership took India to a winning position. Jadeja scored 68(57) and Bhuvi this time didn’t miss the half century.

India had a real opportunity with a Target of 319. England were in trouble at 72/4, but Moeen Ali and Joe Root combined forces and consolidated for 101 runs. Things were looking bright for England, but Moeen couldn’t parry the last ball before lunch off Ishant and it was taken by FSL.

Suddenly, after lunch, almost every English batsmen tried to counter attack the Indian strategy of short bowling. Eventually they flustered and India succeeded. Ishant Sharam bowled without any inhibition, bowled aggressively and got the rewards. Every pull shot went straight to the hands of fielders. From 173/4, England bowled out on 223.

India won by 95 runs. There was jubilation all round in India. There had been some controversies between Jadeja and Anderson. But Jadeja’s straight hit ran Anderson out and perhaps settled all the issues. Ishnat was given Player of the Match. Probably Bhuvenehswar also deserved that.

India won the match exactly today, 7 years ago. It took India 28 years to register another victory at Lord’s. It was also the first overseas win after 3 years.

Unfortunately, India couldn’t replicate the same performance in the upcoming Tests and lost the series by 3-1.

Keeper who has been deprived from the recognition that he deserved

BJ Watling, the former NZ keeper, who has just retired from all forms of the game, over his entire career has become a synonym of underrated.

As per the stats, as a WK, Watling has been involved in 260 dismissals. This is the best amongst the NZ keepers. Talking about dismissals per innings, he has had the ratio of 2.08, which implies that he has had on average four dismissals per Test match. Second best is Brendon McCullum with 1.87.

Another notable stat is that, he has the most runs, highest strike rate and most centuries for any Kiwi WK and has played only one Test less than the most Test capped Kiwi WK, Adam Parore. This means, after doing squats more than 540 times a day, diving, running he kept his concentration to come back and score the runs.

Test cricket is all about spending the time on the pitch, tiring the bowlers out and then having slash at them. BJ did exactly that, Ok maybe not slashing at the bowlers, but he definitely had tired them out. If you have any doubts, ask the Indian bowlers who were on the tour of NZ in 2014.  He had shared a mammoth 352 run partnership when Brendon McCullum scored a triple century against India. BJ is above Virat Kohli in terms of balls/dismissals. In the next year, against SL, he was involved in another partnership of  unbeaten 365 with Kane Williamson.

As said earlier he is more of an occupier at the crease than a slasher. He has been involved in a total of 80 sixth wicket partnerships and on an average each partnership has contributed 54.49 runs. 55 runs for the sixth wicket would be priceless, doesn’t matter the situation of the match. By the way, this is the highest.