The SportsLiteSports at just one click!
HomeCricket in Cricket history: Third U-19 World Cup triumph for India
CricketForever FactsToday's in History 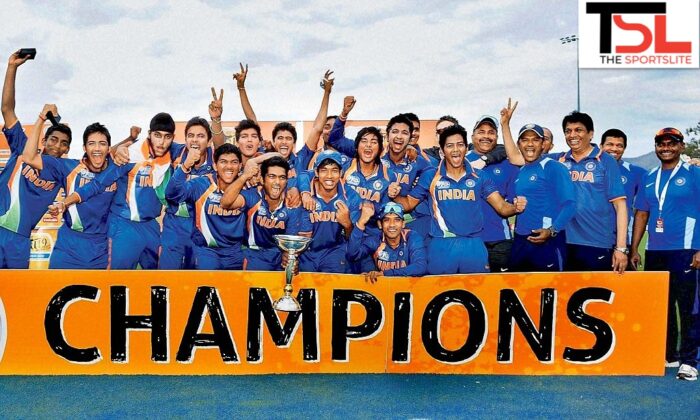 Indian youth already had some wonderful moments at the U-19 World Cup. Mohammad Kaif in 2000 and Virat Kohli in 2004 had already tasted victory on the world stage in U-19 Cricket. Now it was an opportunity for the next group of prodigious young boys to lift the trophy under the captain Unmukt Chand.

On 26th August 2012, in Townsville India defeated Australia in U-19 World Cup Final to lift the trophy which has been lifted by so many youngsters who later became the legends of the game.

Sandeep swings past the Aussies

India invited the Aussies to bat first. India wanted to bowl first, they did bowl first and never felt that the decision was wrong as they continued to chip wickets regularly. Kangaroos at one stage were 38/4 in 11.2 overs. The Aussie skipper William Bosisto and Travis Head resurrected the innings by a 65 run partnership for the 5th wicket. Travis Head, while stealing a run couldn’t make the crease in time, he ran himself out when the score was 105/4. Head made 37(56). Ashton Turner’s quick 43 from 50 balls helped the captain to push the total above 200. William Bosisto remained not out at the end of 50 overs on 87(120), Australia posted 225/8. Sandeep Sharma played a crucial role, not only because he took 4 wickets but also for the fact that all those were prized wickets. He bamboozled openers with the swing and when Ashton Turner and Alex Gregory were looking for some quick runs, Sandeep sent them towards Pavilion. Ravikant Singh and Baba Aparajith took one each. Every bowler played his part and never allowed Aussies to cut loose.

Also Read: What are the Top 5 lowest team totals in IPL ?

Some hiccups, but safely reached the  home

Though the target seemed to be a modest one, the pressure of Final could do funny things. The start wasn’t great for India when Prashant Chopra went for a glance and edged it to the keeper. The score was 2/1. Aussies would have hoped for some nervy moments and a jumpy start from the number 3 batter Baba Aparajith, but he along with the captain stood there for another 73 runs. The things were looking positive, but it’s quite difficult to rule out determinants and dedicated Aussies. 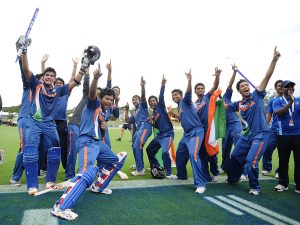 They came back harder and picked three wickets, suddenly from 75/1, India were 97/4 at 25th over. The game was in balance, but Smit Patel, the new batter showed his mettle. Along with Captain Chand without any further glitches took India over the line. Smit Patel’s unbeaten knock of 62 from 84 was equally important as Unmukt Chand’s captain’s knock of unbeaten 111 in 130 balls. Chand hit 7 fours and 6 sixes. Australians bowled well, but Indians coped up with pressure nicely and brought home the third U-19 World Cup Trophy.

The match would be remembered for both the skippers’ knocks. Though Unmukt Chand’s match-winning century helped him to be the Man of the Match in the Final. India won the U-19 World Cup 2012 Final by 6 runs.