The SportsLiteSports at just one click!
HomeBadmintonTokyo 2020: P.V Sindhu loses to Tai Tzu Ying, to play for...
BadmintonTokyo Olympics 2020

The Indian shuttler matched her opponent shot for shot, but it did not prove to be enough as Tzu-Ying ended up taking the first game 21-18. Sindhu needed to win the next game to stay alive in the semi-final. 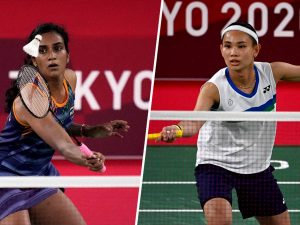 Tzu Ying is currently ranked first in the BWF women’s singles world ranking. On the other hand, Sindhu is placed seventh on the BWF leaderboard

The champion had stormed into the semis with a fighting straight-game win over world no 5 Japanese Akane Yamaguchi on Friday.

The 26-year-old Indian, who won a silver in the 2016 Rio Olympics, defended brilliantly and rode on her attack to outclass the fourth-seeded Yamaguchi 21-13 22-20 in a 56-minute quarterfinal clash at the Musashino Forest Plaza here. 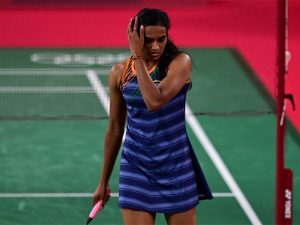 In the second game, the world number one came out with all guns blazing and exhibited a full array of deceptive shots, most of which caught Sindhu stranded in one end of the court. On a few occasions, Sindhu tried to dictate the rallies but Tai matched every smash of hers.

In recent times, Tai has proved to be the Indian’s arch-nemesis as now she’s played the world number one from Chinese Taipei on 19 occasions. To Sindhu’s detriment, she has ended up on the losing side on 14 occasions. Now, Sindhu has all to play for tomorrow as she will face He Bing Jao in the bronze medal match.