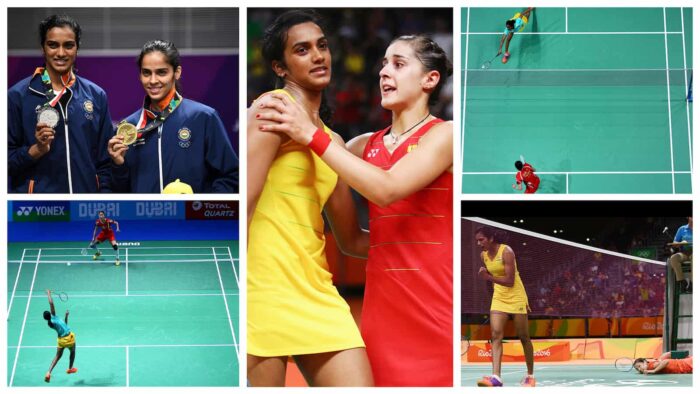 PV Sindhu is one of the most heard names in the history of badminton. She has amazed her fans with many vigorous performances throughout her career. Undoubtedly, she has consistently brought her best to the court. Without a doubt, she has a long list of best performances in her records of accomplishment. Here’s have a look at some of the matches that shows PV Sindhu pushing herself to the limits of never giving up in her amazing pursuit of excellence. Check out the 5 Best Performances Of P.V Sindhu.

It was the match when a 17-year-old PV Sindhu chose to announce herself on the International stage. Against, Li Xuerui of China in the quarter-finals of the China Open Super Series. She gave an outstanding performance and defeated Li Xuerui in her own home country by 21-19, 9-21, 21-16.

She reached the finals with her amazing performance. With an equally strong opponent Carolina Marin of Spain standing across the court in the final, it was hard to win. Though Marin won the match, P.V Sindhu delivered an outstanding performance.

In this match which lasted for 110 minutes, both shuttlers struggled to even stand after the final point. It was one of the greatest in the history of the game. P.V Sindhu with her amazing statics of powerful jump smashes and lighting-quick return that helped her score needed points but even after such amazing performance, she lost to Nozomi Okuhara by 19-22, 22-20, 20-22

She got her hands on a gold medal by winning the World Tour Finals 2018 with a win against Nozomi Okuhara, the one from whom she lose the gold 2 years before. And, she’s the first Indian to win the BWF World Tour.

She performed in the Commonwealth Games in 2018 winning two medals in the same match in the year 2018. She won one gold medal in the mixed team event and silver in the individual event. Earlier, she had also won bronze in the 2014 commonwealth games.

These are the top 5 best performances of P.V. Sindhu across her career.