PV Sindhu defeated He Bingjiao 21-15, 21-13 in just 53 minutes in a crunch match on Sunday. The Indian star was on top of her game, deflating her Chinese opponent with her guile and aggression, something that Tai didn’t allow her to do on Saturday. 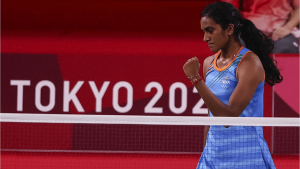 Sindhu becomes only the 2nd Indian after Sushil Kumar to win two individual Olympic medals. She is the first woman athlete from the country to do so. She is also only the 4th women’s singles player to win back-to-back medals at the Olympic Games.

Sindhu also became only the 2nd Indian athlete (and 3rd to confirm) in Tokyo Olympics 2020 after Mirabai Chanu to win a medal. She had won the women’s singles badminton silver at the Rio Olympics, which was also her Games debut. Sindhu had fallen agonizingly short of the gold medal as she lost the title match to Spain’s Carolina Marin despite winning the opening game five years ago. Sindhu rose to fame at the international level when she won the Asian Championships bronze medal in 2014. She had a dream year as she went on to win bronze medals at the Commonwealth Games and the Asian Games. In fact, Sindhu also won her first of 5 World Championship medals in 2014.

Sindhu was not among the favourites for finishing on the podium at the 2016 Olympic Games but the then 21-year-old had a dream run to the final where she lost to Marin and finished with the Silver medal.