The SportsLiteSports at just one click!
HomeUncategorizedTop-5 Biggest Innings of Virat Kohli against Pakistan
Uncategorized 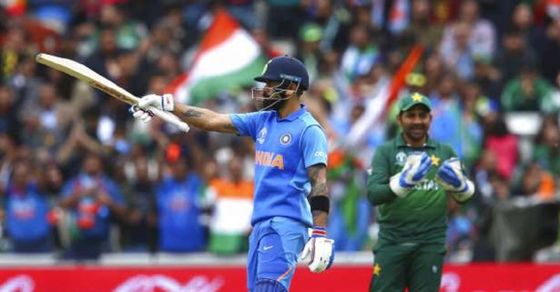 India have dominated Pakistan overall in all ICC World Cup matches. Virat is at his peak when playing against Pakistan. It is interesting to know that Virat Kohli is yet to be dismissed by Pakistan in World Cup T20s. Virat Kohli has been India’s highest run-getter against Pakistan in T20Is. He has scored 254 runs from six innings. The current year has proven to be a fruitful one as he has played five T20I games so far and scored an impressive 231 runs from them. Mentioned below are the Top-5 Biggest Innings Of Virat Kohli Against Pakistan.

India skipper Virat Kohli scored 77 runs off 65 balls with a Strike rate of 118.46 hitting seven fours. Indian team put 336 runs on the board and won by 89 runs . But something happened in this match that overshadowed Kohli’s performance . Batting on 77 in the 48th over of the Indian innings, he tried to pull a bouncer off Pakistan paceman Mohammad Amir and thought he got a faint edge, which carried to wicketkeeper Sarfaraz Ahmed. Pakistani players made an appeal but the umpire was not convinced. Kohli, however, did not wait for a decision and walked off the field. Replays suggested that the Ultra-edge did not show any spike.

In this match, the India skipper Virat Kohli was unbeatable and scored 55 runs off 37 balls with a Strike rate of 148.65 hitting seven fours and one six. Pakistan team disappointed their fans in this match as they were able to score only 118 runs. Indian team chase the target in just 15.5 overs and won the match by 6 wickets. It was run-machine Kohli who did it again for India while chasing. So for this spectacular performance, he was given the man of the match award. During the match, he kept his calm and build a partnership with Yuvraj Singh as Batsman we’re getting out cheaply and the team was losing its momentum.

India skipper Virat Kohli  was unbeatable in this match and scored 78 runs off 61 balls with a Strike rate of 127.86 hitting eight fours and two sixes. Pakistani team disappointed their fans. They tried flamboyance with the bat and failed, and didn’t show heart to back up their talented bowling and attack. It was a much needed win for team India to stay alive in the tournament . Kohli was the star performer of this match as he performed with both bat and ball . He bowled 3 overs with 7 economy rate and also took the wicket of the captain I.e. Mohammad Hafeez

The run-machine Virat Kohli scored 107 runs off 126 balls with a Strike rate of 84.96 hitting eight fours. In this match India put a grand total of 300 runs as they performed spectacular with bat . Pakistan got all out in the 47th over by just scoring 224 runs and the credit for this win goes to the big partnership between Virat and Shikhar. Kohli was given the Man of the Match award because of his jaw-dropping performance. He was happy to start the World cup tournament with a win complimenting it with a century.

Virat Kohli popularly known as King Kohli scored 183 runs off 148 balls with a Strike rate of 123.64 hitting twenty-two fours and a single six. Pakistani team impressed everyone with their batting performance as both the openers slammed a century. India lost the wicket of Gambhir in the first over and Kohli walked in at No 3 to take the run-chase by the scruff of its neck. Chasing a big target of 330 in Dhaka, Kohli smashed 183 and guided India to a six wicket win . So far Kohli’s 183 in Dhaka remains his highest ODI score till now .