The SportsLiteSports at just one click!
HomeCricketWI vs Australia: Marsh leads Aussies to victory in 4th T20
Cricket 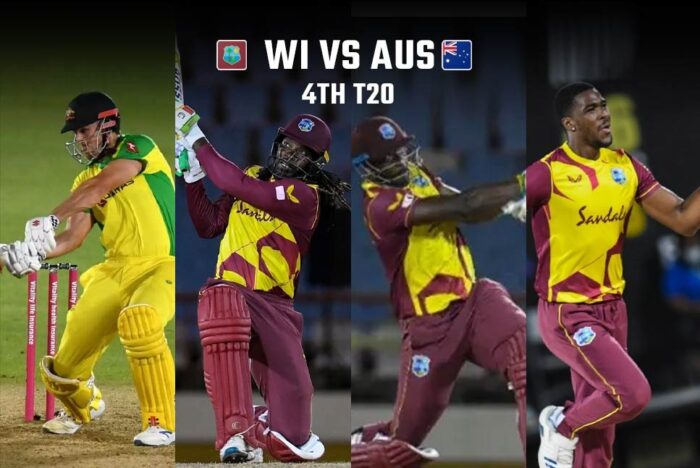 WI vs Australia: T-20 is a cruel game for bowlers and it has been proved once again at St. Lucia in the 4th game of the 5 match series between West Indies and Australia.

Rapid start to the chase

Chasing 190, Evin Lewis and Lendl Simmons made a rapid 62 run partnership in just 4.5 overs. Lewis batted with an unbelievable strike rate of 221.43 and scored 31(14). The match winners from the last game, Gayle and Pooran played poorly. Gayle scored only 1, while Pooran scored 16(15), and never actually could up the ante. From 62/0, WI were 132/5 at 15.3 overs mark. At the fall of Andre Fletcher, another Andre came into bat, he was Andre Russell.

When Russell came, WI was in need of 58 in 4.4 overs, a template situation for Russell. Russell, Along with Fabian Allen, started to take the game away from Australia. WI needed, 47 from 3, then 36 from 2. They scored 25 runs in the penultimate over from Meredith, Allen hit 3 sixes in that over. But there was some twist at the end, Allen was caught by Wade on the last ball of the 19th over. He scored 29 from just 14 deliveries with 2 fours and 3 sixes.

11 runs in the last six balls, Russell was on strike, Mitchell Starc was the bowler. Many would have thought Australia had lost the game. Starc, instead of using variations, just bowled with maximum pace. Russell decided not to take any single and while doing so, he played 4 consecutive dot balls. The game was actually done there. He scored six runs from the last 2 balls, but it didn’t matter as Starc restricted WI in the last over to only 6 runs, when actually they were in need of 11. Australia won by 4 runs.

Every other Australian bowler couldn’t stop WI from scoring freely. The exceptions were Adam Zampa and Mitchell Marsh. Zampa took 2-20 in 4 overs, while Marsh took 3-24 in 4 overs. The economy of 5 and 6, when others were going for 8 and 10, really speaks a lot about how well these two have bowled. Starc went for plenty, but he bowled the most crucial over of the match and won the game for Australia. Meredith had a very poor game, he went for 57 runs in 4 overs with just 1 wicket. Fortunately for him, it was compensated by economic spells from Zampa

Marsh all over the match

Earlier in the first innings, 2nd wicket partnership between Finch and Marsh of 114 in 9.4 overs, had really set the tone for Aussies. In the first 10 overs, Australia had scored 112/1 and in the last 10 overs, they just managed to score 77/5. Dan Cristian’s unbeaten 22(14) reduced the gap between the projected score after the fall of the 2nd wicket and the final score. Finch scored 53(37). Mitchell Marsh, after so many days, played the innings as per his reputation. 75 from just 44 balls, hit 4 fours and 6 sixes. Only Hayden Walsh could keep the Aussies under control, picked 3 for 27 in 4 overs.

Luckily for Australia, the collapse of the middle order didn’t really backfire. Otherwise, they would have received a lot of criticism. Anyways, Australia won the 4th T-20 by 4 runs. Mitchel Marsh has been given the Player of the Match award, for the match-winning performances in both innings.