The SportsLiteSports at just one click!
HomeCricketBetter luck next time : England Women Team beat India as per...
Cricket 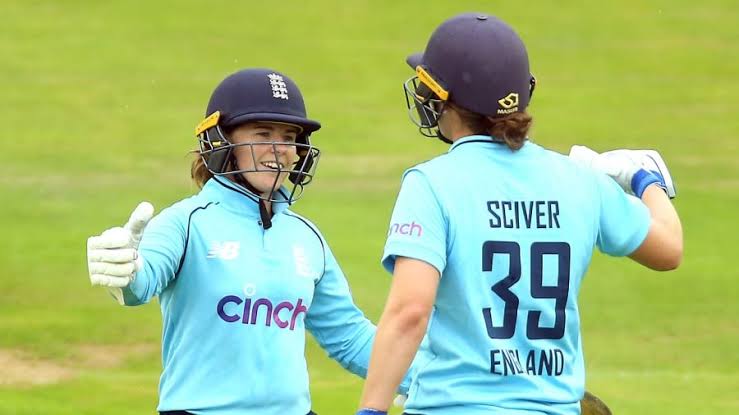 After an enthralling victory in the last ODI against England, the Indian women’s team were in good spirits to start the 3-match T-20 series. The match was going so nicely but rain came at a critical time and dominated the rest of the game. Umpires had to take the decision to abandon the play and England won by 18 runs as per the DLS method.

Indian women won the toss and decided to put England on to bat first. England batters got a flying start, scoring 56 runs for the first wicket in 7.2 overs. Natalie Sciver played with a positive attitude and with a strike rate of 203.70. She scored 55 from 27 balls, an ideal innings for any number 3 batter in T-20s. She was well supported by the opener Danielle Wyatt [31(28)].

At the 11 over mark game was in perfect balance, England were 85/3 after the loss of captain Heather Knight. The stage was set for both sides to play the best game and dominate the game. England assessed the situation pretty quickly. Along with Sciver, the wicketkeeper batter Amy Jones built an excellent partnership of 78 in just 7 overs. The partnership set the game for England to win. Jones scored 43(27) with 4 fours and 2 sixes. In 20 overs England scored 177/7.

Except Shikha Pandey, no Indian bowler could actually restrict England from scoring quick runs. Shikha picked 3 wickets for 22 in 4 overs. Poonam Yadav and Radha Yadav picked one each.

Big target, needs a big opening stand. England, on the second ball of the 2nd innings hit the timber of Shefali Verma. Smriti Mandhana tried to score quickly and did score quickly at 170.59, but couldn’t continue it for a long time. She scored 29(17). Harleen Deol, couldn’t accelerate the way she should have been. The rain came when India were 54/3 in 8.4 overs and then it was all rain. Indian in their 8 overs at the crease were trying for the DLS target than the actual one. But they fell short of 18 runs. Katherine Brunt, Natalie Sciver, Sarah Glenn picked Shefali Verma, Smriti and Harmanpreet respectively.

Player of the Match

Natalie Sciver has been awarded as Player of the Match for her all-rounder performance.

Have a great day ahead ☺️