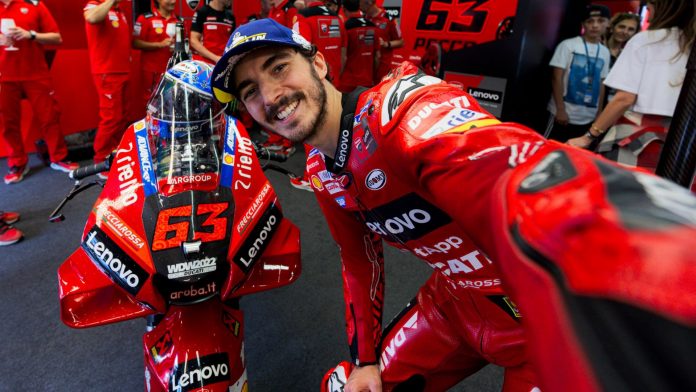 Valencia: Ducati’s Francesco Bagnaia wins his maiden MotoGP Title after a nerve-wracking finale at Circuit Ricardo Tormo. Bagnaia become the first Italian to win the MotoGP after Valentino Rossi in 2009. In addition, He became the first racer to win the Word Title after registering 5 DNFs. Bagnaia’s win also ended the 50-year wait for an Italian racer to win in an Italian Bike.

Francesco Bagnaia led the rankings by 23 points ahead of Yamaha’s Fabio Quartararo coming to Valencia. The French racer and close friend of F1 Driver Pierre Gasly required nothing less than a win to register another title. Even though Fabio finished fourth, five places ahead of Bagnaia, it wasn’t enough to leapfrog the Italian in the race standings. Bagnaia won five races in the season and topped the rankings with 265 points. Fabio Quartararo finished second with 248 points while Bagnaia’s teammate Enea Bastianini finished third with 219 points.

The Valencian Grand Prix marked the end of Suzuki as a factory team. It could not get any sweeter than Alex Rins winning it for Suzuka after fending off the pole-sitter. South African Brad Binder of KTM finished the race second at a minute gap of 0.346 seconds. Spaniard Jorge Martin ensured a successful season-ender by placing him at the podium in third. Quartararo devastatingly finished fourth behind the Spaniard. 14s later after Rins won the race, Bagnaia crossed the chequered flag and went off to his crew and Rossi and celebrated the victory.

Ducati ended a 15-year drought with Bagnaia placing first in the Riders Championship. The last Ducati to do so was Casey Stoner in 2007. Ducati led Yamaha by 192 points in the constructor championship. In the team standings, Ducati Lenovo Team finished first with 456 points.

Also Read: Lewis Hamilton Diet Plan: Is he Vegan or Vegetarian or a Meat-Eater?

Mohammed Bazimhttp://thesportslite.com
With a dream to be in the paddock living the life, Mohammed Bazim is a 19-year-old collegiate who spends his day watching old games, trying to learn more about his passion, Formula One. Hailing from Kerala, he considers himself to be a trivia aficionado. His lover passion for trivia does not end at Formula 1, it just begins there. Bazim loves to write about anything and everything related to Business, Sports, Fashion, and International Relations.
RELATED ARTICLES
Motorsports