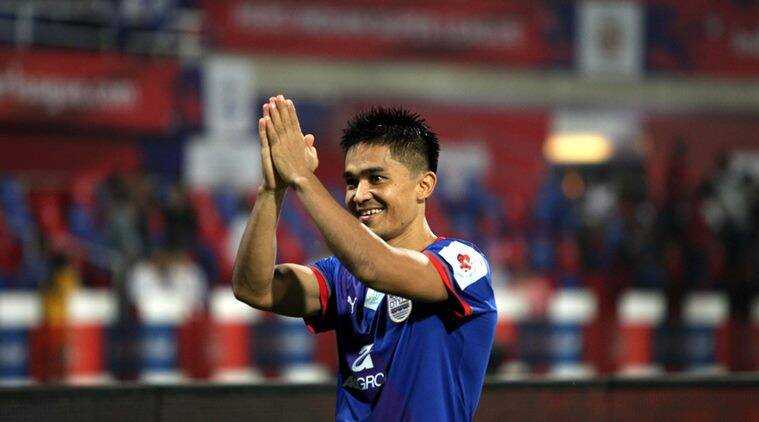 Sunil Chhetri is one of the prolific strikers in India. His lethality and agility inside the box are highly praised by many football superstars. He shares the second-highest active goal scorer position along with Lionel Messi. Chhetri has a goal tally of 80 as of now and with many more to come. Leading India from the front, he is the captain of the Indian National Football Team. Let’s have a look at Sunil Chhetri Net Worth, Salary & Endorsements.

He is one of the richest footballers in India. Sunil Chhetri plays for Bengaluru FC and his football career has been immensely successful in both country and club. Chhetri net worth is said to be around $1.1 million (₹8 Crore). Though he is not getting paid as high as compared to other cricketers in India. Still, this is an amazing feat to achieve after all his struggles.

Sunil Chhetri plays for Bengaluru FC in ISL and he earns up to ₹8-10 lakh per match, which varies from match to match. According to this calculator, his earnings get up to ₹80 Lakh to ₹1 Crore per year.

In 2018, the Chettri was part of the KIA’s official match ball carrier initiative for the 2018 FIFA world cup which was held in Russia.

Chettri has a partnership with Puma, which is one of the most famous German sports brands in the world. Puma became the official supplier of Chettri in December 2019, on a three-year contract.

He also has sponsorship from twelfth man, “ a football-only”, which is an online fantasy gaming platform from NXGn Sports interactive. He signed this deal in May 2020.

Sunil Chhetri lives in the most amazing and Luxurious farmhouse along with his family which is situated in Bengaluru, Karnataka. Sunil Chhetri doesn’t have a lot of cars in his possession, he only has one luxury car, an Audi A6. He owns some motorcycles and other branded cars like Kia Seltos, Mahindra Scorpio, Maruti, Suzuki SX4, Toyota Fortuner.

Sunil Chhetri Net Worth and Other Details

Sunil Chhetri has a very successful professional career. He has achieved great heights in his career and he has also done some phenomenal work for his country. Sunil Chhetri made his debut in 2001, in City Football Club. In 2002, he was selected by Mohun Bagan and since then he has played for various clubs including the likes of East Bengal and Mumbai City. He has been to foreign clubs such as Kansas City and Sporting CP. Currently, Sunil Chhetri is playing with Bengaluru FC, in the Indian Super League.

Sunil Chhetri made his debut for the Indian under 20 team in 2004 and 2005, he became the permanent of the Indian football team. Sunil has scored a total of 80 goals for his country, which is quite a big achievement.

Also Read: MS Dhoni Net Worth, Endorsements and Sponsorships in 2021