The SportsLiteSports at just one click!
HomeFootballList of All Major Domestic Football Tournaments and Leagues in India
FootballForever Facts

List of All Major Domestic Football Tournaments and Leagues in India 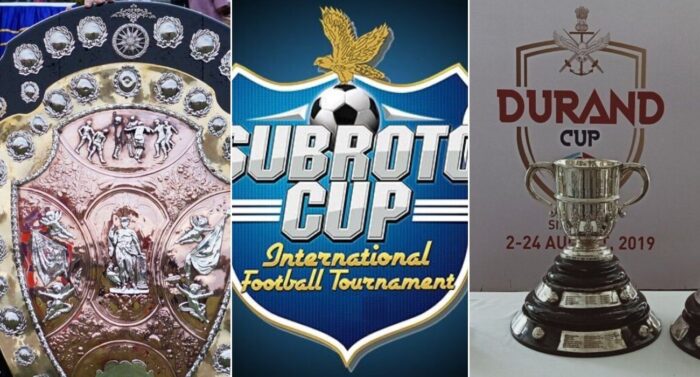 Over the years numerous tournaments and leagues in India have formed and are being actively played. The game of Football has been an emotion among the Indians. In India, people love all kinds of sports and out of one is football. The history of this game goes deep into its roots. The first-ever football match India played was in 1854, between ‘Calcutta Club of Civilians’ and the ‘Gentlemen of Barrackpore’. Football is an integral part of the lives of the citizens of India. Let’s have a look at All Major Domestic Football Tournaments and Leagues in India.

Durand Cup is the oldest football tournament in Asia. It is the first-ever match that was played in the year 1888 at Shimla. This tournament is controlled by the Durand Football Tournament Society. At first, it was meant to be an Army Football tournament which later changed to a civilian tournament. Out of the total 16 teams in the tournament, Mohun Bagan and East Bengal have won the most number of titles with a total of 16 each. Currently, the tournament serves as the pre-season knock-out tournament for India’s football clubs from all divisions before the start of the Indian domestic football season each year.

The IFA Shield cup is another major domestic football tournament in the country. It is organized by the IFA. The Indian Football Organisation has its office in West Bengal and was established in the year 1893. This tournament is now organized as a national championship for the Under-19 teams from 2015. The first-ever team to win the IFA is Mohun Bagan Athletic Club.

Santosh Trophy is a football tournament that is conducted among the state football associations and the government departments under the All India Football Federation (AIFF). This tournament was started in 1941 and has a total of 31 teams playing in it. The current champion is the Services team who has won a total of 6 titles so far.

Read More: List Of Players With Most Appearances In Indian Super League

The Subroto Cup is a Cup that is organized by the AIFF, at Delhi as an Inter-School Football championship for students. The Cup was first formed in 1960 and is named after Indian Air Force Air Marshal Subroto Mukharjee. Students from various parts of the continent participate in this annual tournament making this one of the most important Football tournaments in Asia.

The Super Cup or AIFF Super Cup, currently known as the Hero Super Cup, is an annual knockout football tournament in India organized by the All India Football Federation (AIFF). It was established as a successor to the Federation Cup. The tournament features 20 teams that play in the Indian Super League and I-League, the current top divisions of the Indian football league system respectively.

I-League is one of the two premier Football leagues in India. It was established in 2007. A total of 11 clubs across the country go head-to-head in the league. The club that wins the title gets a chance to take part in the AFC Cup. Dempo is the only team that holds the record for the most titles with 3 I-League. After the introduction of ISL, I-League is now the 2nd major league in India.

Indian Super League is the newly formed tournament in India that started in 2013. ISL is now the topmost league in India. The tournament consists of 10 teams and the matches are organized by AIFF and Football Sports Development (FSD). Just ahead of the 2017-2018 season of the tournament, they made slight changes to the period of the tournament. They made it six months long starting in October and ending in March of the next year. ATK is the 3-time winner of the ISL.

Special mention to the Federation Cup which was formed in 1977. It was a major tournament in India but it was abolished in 2017.