The SportsLiteSports at just one click!
HomeCricketENG vs Pak 1st T20: Have a look at the records broken...
Cricket

ENG vs Pak 1st T20: Have a look at the records broken in this match 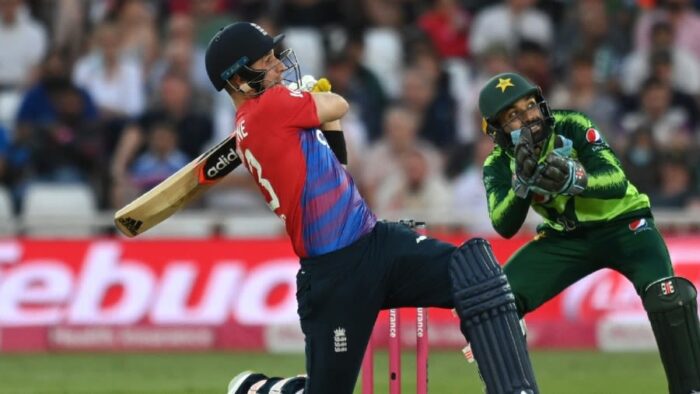 After being thrashed out 3-0 against England’s second-string team in ODI series, Pakistan faced England with their core players back in 1st of the Three T20I on 16 July 2021, Friday at Nottingham. Pakistan showed some brilliant performances throughout the match to register their 1st win of the tour. 1st T20I between England and Pakistan also witnessed some of the records broken for both the teams during the match. Let’s have a look at records broken in 1st T20I:

Pakistan was put on to bat first after England captain Eoin Morgan won the toss and chose to bowl first in the 1st T20I. Pakistan openers Babar Azam and Mohd. Rizwan gave them the best possible start after disastrous ODI losses and score their respective half-centuries before later departed on 63 to end their partnership. With a strong start, Pakistan ended up their innings with a total of 232/6 with Fakhar Zaman and Mohd. Hafeez playing a good cameo in the end. This was Pakistan’s HIGHEST ever T20I score taking over their earlier score of 205/3 which came against West Indies in 2018 at Karachi.

Joint most number of wins by visiting teams in England in T20I against England:

Pakistan registered their 4th T20I win against England in England which is the most by any team alongside West Indies. Pakistan achieved this feat. as they comprehensively beat England by 31 runs. Only West Indies had managed to win 4 T20I matches in England before yesterday.

Highest ever T20I partnership in England against England: 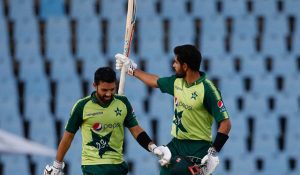 The opening partnership of 150 runs in 14.4 overs between Pakistan skipper Babar Azam and WK Mohd. Rizwan is the highest ever partnership for any wicket in England against England. Before this partnership, this record was held by India’s Rohit Sharma & KL Rahul who made 123 runs together for 2nd wicket at Manchester in July 2018. 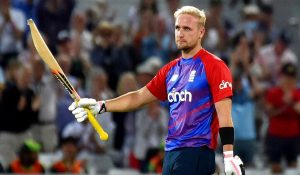 After losing 3 wickets inside the first 5 overs, Liam Livingstone came at no. 5 to join Jason Roy and take England’s chase ahead, Liam started with a bang as he took on Haris Rauf & Shadab Khan early in his innings. He went on to register the fastest 50 by England batsman in just 17 balls. He didn’t stop there and went to claim his maiden T20I century in just 42 balls and also broke the record of Dawid Malan’s fastest T20I century for England. Malan had scored his century in 48 balls against New Zealand in 2019.

Liam Livingstone also broke one big record while scoring a century yesterday. This time not just for England but he broke the world record of the highest individual score by any batsmen in the world batting at no. 5. He surpassed David Miller’s 101* batting at no. 5 in T20I as he scored 103.

Most sixes by any England batsman in single T20I innings:

On his way to score his maiden T20I century, Livingstone hit 9 sixes which recorded the most number of sixes by any England batsman in T20I. Before this, the record of most sixes in an innings was jointly held by current England skipper Eoin Morgan, Jason Roy and Ravi Bopara with 7 sixes to their name.