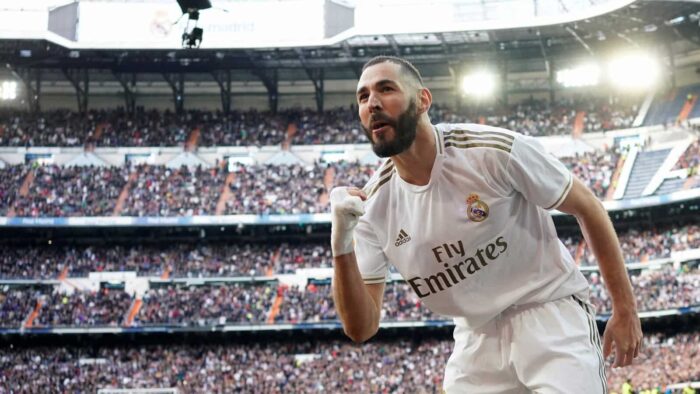 Only a few players in top-tier European football can match Karim Benzema’s consistency and longevity. The prolific Madrid Star has been in the team rooster since 2009. Let’s look at some unknown facts about the French International Karim Benzema.

El Clásico is arguably one of the greatest matchups between rivals. The historic fixture has seen goalazos left, right, and center.

Karim has a unique record of scoring the fastest goal in the history of the coveted fixture. He took just 22 seconds to score in the December 2011 La Liga El Clásico. Real Madrid went on to win La Liga that season.

2. One of the 5 All-time Champions League Goalscorers:

When you think of the Champions League, CR7 pops up, but Benzema has also made his mark in the premier competition. He may not be on top of the list, but the talisman striker has 76 goals in 136 appearances.

He scored 12 for his boyhood club Lyon and flourished after joining Los Blanco, scoring 64 goals. Furthermore, he is only behind greats like Cristiano Ronaldo, Lionel Messi, and Robert Lewandowski.

3. He could have Played for Algeria:

Born in Lyon, France of Algerian Descent, Karim Mostafa Benzema was eligible to play for the Algerian national team.

AFF also tried to convince him when he was at the peak of his career. He went on to represent France and recently won the UEFA Nations League with Les Bleues.

Karim overtook his idol Zinedine Zidane to become the All-time leading French goalscorer in La Liga. He did so in March 2012 after scoring a brace against Real Sociedad.

Since then, he has been an asset to Los Blancos, scoring 210 goals in 405 appearances. He also won 4 Champions League and 3 La Liga titles along with other honors.

5. A Film was made about his Life:

In 2017, a film was released titled “Le K Benzema” which showed him rising through the ranks of Lyon to become a Real Madrid Galactico.

It featured interviews with his family, friends, teammates, and support staff. It also showcased his close relationship with his idol and French legend Zidane.

6. Served as a ball boy as a youngster:

Karim started his football career when he was just 8 years old. He eventually got scouted by Lyon’s youth academy after scoring against them in a U-10 match.

As a youngster also, he was a massive success and rose through the academy ranks. Karim served as a ball boy at Lyon’s senior team matches.

7. Has 8 siblings, including some footballers:

Karim has quite a Big Family. He is the third-youngest out of 8 siblings, 3 brothers, and 5 sisters.

His 2 younger brothers, Gressy and Sabri have also followed in their brother’s footsteps to become professional footballers.

8. Won the U 17 European Championship with France:

Even before Karim became a star striker, he was already winning titles. He was part of the maiden French U17 Euro cup championship winning squad in 2004.

He was among the likes of Samir Nasri and Hatem Ben Arfa. The French side beat Spain in the final on home soil to take the crown.

9. Joined a Clinic to Lose weight:

When Karim joined Real Madrid as a Galactico in 2009, pundits criticized him for not living up to the expectations.

With the advice of french legends Laurent Blanc and Zinedine Zidane, Karim joined a weight loss clinic in Italy to work on his fitness. The trick worked, and Benzema rose from the ashes to become a club legend.

This point is something not often referred to, but some of the simplest overlooked facts. It is well known that Europe’s elite athletes tend to earn a staggering number of wages, Karim is no less.

Along with this Benzema is known to be a fashion icon and has sponsorship deals with prominent brands which makes his total net worth around £55 million.