List of top 5 highest-paid managers  in the euro cup 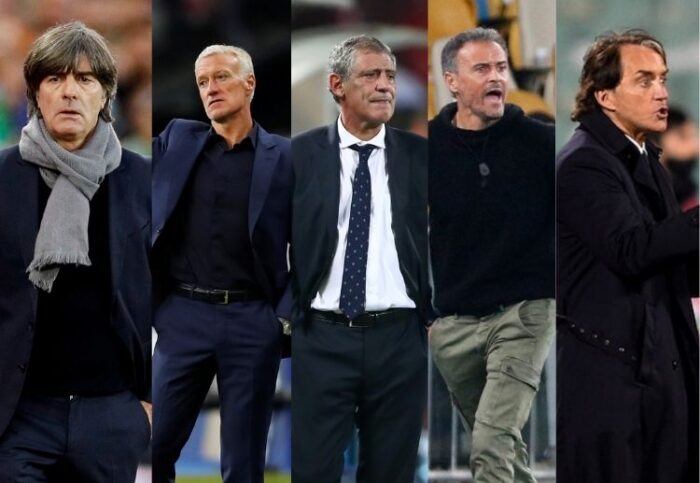 Professional Footballers get lucrative salaries and perks from the clubs for playing for them but playing for the country gives a separate pride. Managing these footballers is one of the toughest jobs and the country football councils hire the best professionals to coach a team for the tournaments like World cup, Euro, Copa cups. A clever tactic from a manager can change the course of a match. Today we will make a list of the top 5 highest paid managers in the euro cup.

Check out the List of highest-paid managers in the euro CUp.

The Portuguese national team boss manages Cristiano Ronaldo, Bruno Fernandez, and others for the Portugal national team. He won the 2016 euro cup for them. The expectation was really high from him in 2020 as they had a better team this year. Santos is the 5th on the list with 2.75 million euros per annum.

Do you know who is scored most runs: Check out- List of Top-10 Highest Goal Scorer in 21st Century

The England manager Southgate earns 3.25 million euros for managing a start stud England team including Harry Kane, Raheem Sterling, Phil Foden. They went to the finals in euro 2020 but eventually lost in the tie-breaker.

Ex-man city boss Mancini took over Italy after a debacle of their side in 2018 where they did not qualify for the world cup. Mancini revamped the Italian side within a span of 3 years despite all the odds and took them to the glory of winning the Euro Cup. The Azzurri boss earns around 3.5 million euros per annum and stands 3rd in the list of highest-paid managers.

The 2018 world cup winning manager came to the euro with the french side as favorites but they were knocked out by the Swiss team in the round of 16. Deschamps is the 3rd player to win the world cup as a player and a manager. The French side will try to revamp under him in the 2022 world cup.

The German manager Joachim Low tops the list of highest-paid managers in the euro cup with a whopping 4.75 million euros. He was in charge of the German team since 2006 and was replaced after not so good performance in the euro 2020. Despite not having so good a performance, he won the world cup with the german team in 2014.