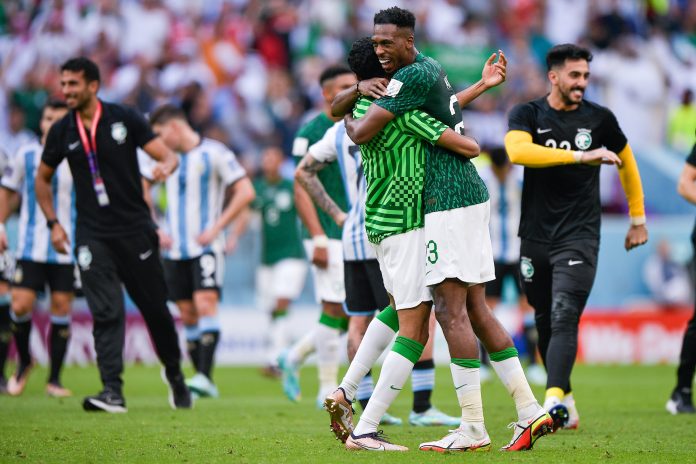 A true underdog story at Lusail. Saudi Arabia aka the Falcons surmounted the tournament favorites Argentina 2-1 as a horde of blues and whites peered over.

Lionel Messi – The sublime beauty of football began his fifth World Cup in style. The clock didn’t hang on for two minutes before Paris Saint Germain’s new striker made his first move. In the tenth minute, after a hold and pull in the penalty box, Lionel Messi slid the penalty smoothly and swiftly to take Argentina on top. The Albeceleste did not stop charging. In the next twenty minutes or so, they scored three goals, only to be ruled offside by VAR. Once by Messi, Twice by Lautaro Martinez. At the end of the first half, Argentina looked safe with one goal up.

It was mesmerizing how Saudi Arabia trapped the Argentinians with offside in the first half. The defense clocked a top-notch performance. In the second half, the Argentine relaxed a bit on the attack while the Arabians picked up. It didn’t last very long for Saudi Arabia to score their first goal. Argentine defenders could only watch as Shehri got around Romero and slid it past Martinez. The crowd erupted in greenish dreamland as Argentine looked down on their unbeaten streak sinking. The moment of realization hit the Argentines hard as the falcons smoothly slid in the second unbeknownst. Salem Al Dawsari put Saudi on top with a stunning goal perfectly curved into the far corner. Argentina tried its level best to equalize. The strong fort, Mohammed Al-Owais did not budge as he saved five shots and intimidated the Argentine forward.

Saudi Arabia, with the victory not only Argentina’s 36-game unbeaten streak, but also managed to take three points. The points oversaw the Falcons moving to the top of Group C. Also, A victory over Poland or Mexico can establish their R16 Qualification. Meanwhile, the trophy is slipping away from Argentina. The chances of a non-Argentina quarterfinal have grown in a good proportion. Argentina faces Mexico on Sunday IST time while Poland meets Saudi Arabia on Saturday.

Will Argentina qualify? Let us know what you think in the comments below.